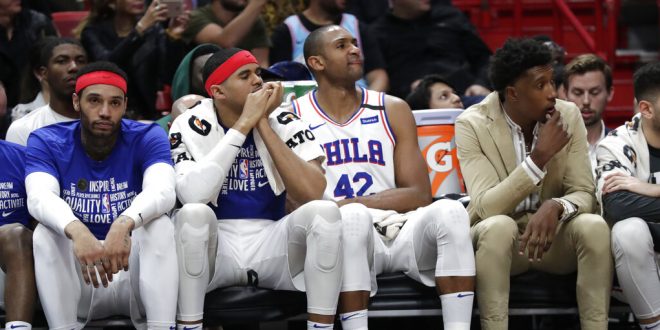 A lot noise is in the system for the Philadelphia 76ers. They were a team expected to be in the hunt for a title but right now look like a team searching for answers.

So we ask the age-old question: What is the problem here?

The Sixers’ All-Star center missed eight straight games due to a torn radial collateral ligament in his left ring finger. He returned on Jan. 28 against the Golden State Warriors and posted 24 points and 10 rebounds in 26 minutes of play.

He recorded another double-double the following game against Atlanta but had a -2 plus-minus rating in a 127-117 loss.

Then he got worse. Embiid followed that performance up with a 1-for-11 night with just 11 points in 23 minutes and a plus-minus of -25 in that 21-point loss to the Celtics.

In Philly’s 137-106 loss to Miami on Monday, Embiid had 29 points and 12 boards but still posted a -16 plus-minus rating. Now, that could be attributed to the meteoric rise of Bam Adebayo and the Miami Heat.

Joel Embiid on whether the #Sixers have an offensive identity right now:

“No we don’t. Spacing is an issue.” pic.twitter.com/VHzwyKNDm4

Is It the Team?

As a team, the Sixers are shooting 42 percent from the field and under 30 percent from three. Their bench is averaging a fifth-worst 28 points per game over these last three games. Additionally, they’re 9-18 on the road this season.

Players like center Al Horford and forward Tobias Harris during this skid are averaging at least five fewer points per game than their season averages.

Horford missed the game against Atlanta but only scored a combined 13 points against Boston and Miami. Prior to Atlanta, he averaged over 12 points per game.

Harris hasn’t missed a game all season and came into the Atlanta game averaging 48 percent from the field, nearly 36 from three and almost 20 points a game.

Some people are pointing to the locker room and chemistry issues among the players.

Horford on the team’s status:

Is It Brett Brown?

Brett Brown’s received plenty of attention and vitriol for what some would call mismanaging a team with two all-world talents on it.

FiveThirtyEight, ESPN and the SportingNews predicted the Sixers to finish second in the East behind Milwaukee. Bleacher Report had them finishing with the NBA’s best record.

Now, they sit sixth in the East and 3.5 games behind the Heat for fourth in the conference. Now they add a couple of role-players in Glenn Robinson III and Alec Burks to possibly provide some bench help.

Brown on the team needing to right the ship:

"Who gets better under you??"@stephenasmith thinks the 76ers problems comes down to Brett Brown. pic.twitter.com/NyZpBygWsj

But, if you ask Embiid, it can’t all be Brown’s fault.

“We haven’t been winning. Our offense has not been good,” Embiid said. “But I always say, coaches are not out there to make shots for us, they don’t make plays. They can do a better job of setting everything up, but at the end of the day we make the plays.”

Philadelphia faces the East-leading Bucks in Milwaukee at 8 p.m. on Thursday. A good way to back on track is by beating the best team in the conference.