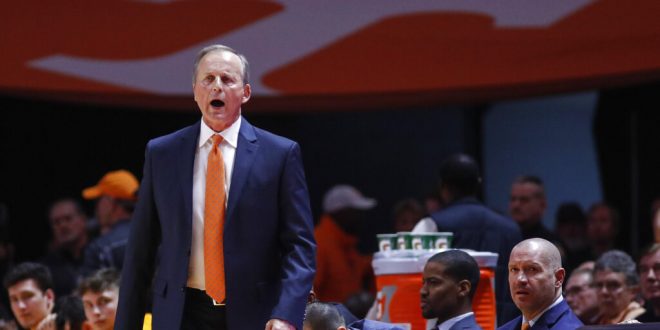 On Wednesday, the Arkansas Razorbacks are traveling to Knoxville, Tennessee to face the Tennessee Volunteers in men’s basketball.

Both teams come in after suffering losses in their games on Saturday. Kentucky beat Tennessee 77-64 after losing twice to the Volunteers last season. All the while, Arkansas faced an 83-79 loss against Missouri in overtime. The loss to Missouri marked the second time this season that Arkansas brought a team to overtime, but was unable to secure the win. Nonetheless, Tennessee comes in ranked ninth in the SEC with Arkansas trailing, ranked 10th in the conference. The Razorbacks are going into the game 16-7 while the Volunteers stand 13-10.

For Arkansas, Reggie Chaney scored a career-high 17 points against Missouri in spite of the loss. In this same game, Chaney also had his second ever double-double with 11 rebounds.

Reggie has a career-high in pts today and his second career double-double. pic.twitter.com/7flW0oZdfO

With the defeat of Tennessee, the Kentucky Wildcats are now in a three-way tie for first in the SEC. LSU and Auburn share the other first-place spots after they faced off last week. Auburn took home a close win with a score of 91-90 to end.

Last season, the Volunteers beat the Razorbacks 106-87 at Thompson-Boling Arena. The Volunteers finished third in the SEC last season with a 15-3 record that placed them high in the NCAA Tournament. However, Tennessee is ranked now where Arkansas finished last season. This dramatic change may stem from the inclusion of only two seniors on the roster versus the five freshmen that came into the program. Of their starting five from their winning team last year, only one remains. In addition, the Volunteers’ three top scorers from last year, did not return to the court in orange and white.

Arkansas came into the season with a predicted eleventh place finish. Of their first twelve games, the Razorbacks won eleven, giving hope to a better season than last. Ever since though, they have been back and forth on their wins and losses.

Rylee is a fourth year journalism major with a specialization in sports and media at the University of Florida College of Journalism and Communications.
Previous Kentucky and Vanderbilt Hoops Tip Off
Next In-State Rivals Clash When Rebels Host Bulldogs