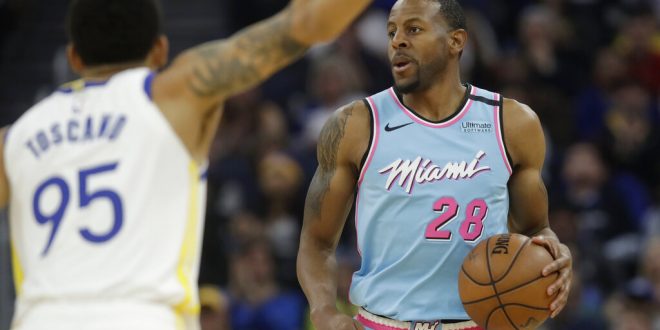 As the Miami Heat wrap up the second half away from home, one member of the Heat felt right at home Monday night. Andre Iguodala, in just his second game in a Miami Heat uniform, played a significant game for him personally. He faced off against his former team, the Golden State Warriors. The Heat pulled off the win in Iguodala’s homecoming 113-101.

Former Memphis Grizzlies, Andre Iguodala, started to lose the love of the game and felt more like he had to work every day instead. He was traded this past Thursday to the Miami Heat and is starting to have the love that went missing again.

He has played in four NBA Finals with the Golden State Warriors and has won the 2015 valuable player award. Iguodala is expected to bring experience to this young team.

“Being around this young group and the spirit they have, they’re just excited to play in the NBA every night,” Iguodala said. “It’s not a drag coming in to play.” This past Monday night, he started his first game as a Heat, with five rebounds, two points, two assists, and a win against his former team.

Three 6-foot-6 wing veteran players have been traded to the Miami Heat. Alongside Andre Iguodala is Solomon Hill and Jae Crowder.

So let’s talk throwbacks. Crowder and Jimmy Butler have reunited and are better than ever. These two players played together at Marquette University and stayed in touch over the years. “It’s great, man, to have my sidekick back,” Butler says. “He was Robin and I was Batman at Marquette.”

Butler has been out for two games with a right shoulder sprain. In his first game back from injury, he led the Heat to victory. He had 21 points and 10 rebounds in his return. Crowder then added 21 points and eight rebounds right beside him.