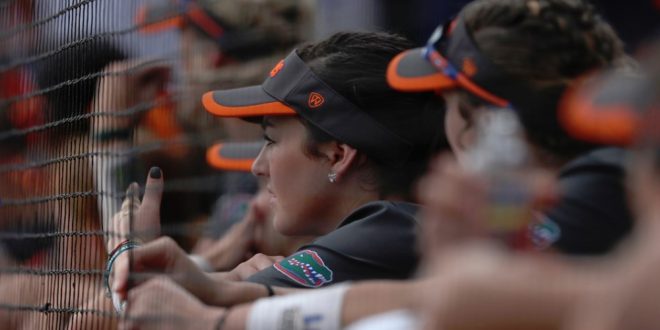 With the gauntlet of games coming this weekend for the Gators, it’s easy to overlook their mid-week showdown against Jacksonville. Nonetheless, when the Dolphins come to Gainesville on Wednesday, so do some of their eyebrow-raising numbers.

Starting out their year 7-3, Jacksonville has secured wins over Nicholls State, ETSU and Alabama A&M. Meanwhile, the Dolphins split their double-headers with Villanova and Ball State. San Diego State has been the only team this season to beat the Dolphins and not have JU turnaround and beat them.

As of recently, Jacksonville has displayed a nice balance in its approach.

The Dolphins have two pitchers who have the ability to maintain a presence in the circle — and they have done that to date.

Senior right-handed pitcher Alyssa Bilodeau has started in five of the Dolphins’ games this season and has posted some impressive numbers. Bilodeau’s ERA sits under two at 1.40 and she has 44 strikeouts under her belt. Her 35 IP proves that she can go the distance if needed.

However, if Bilodeau doesn’t get the start or struggles early, there’s no shame in Jacksonville’s next option.

Behind Bilodeau is freshman righty Sylar Whitty. Whitty is coming off of her first complete game that resulted in a 7-1 win over ETSU on Sunday.

In her four starts and 19 IP, Whitty has thrown 26 strikeouts and has given up seven runs for an ERA of 1.47.

As a team, the ‘phins are batting with an average of .309. Leading the way for the Dolphins is senior outfielder Carolyn O’Neal with an average .545. Though, O’Neal has been up to bat just 11 times.

Senior Makenzie Buss, however, has been to bat 21 times and has mustered a hit eight times, while taking a free base five times. Buss has also launched two home runs this season and has six RBIs. Her average of .381 is second behind O’Neal’s.

Once on base, the Dolphins have found success in thievery. As a team, Jacksonville has gone 15-19 when stealing a bag.

The Gators are coming off of a long weekend after the Bubly Invitational. Going 6-0, however, likely has Florida confident heading into Wednesday night’s contest against the Dolphins. And maintaining that confidence will be important as the Gators prepare to head west to compete in the Mary Nutter Collegiate Classic.

Heading into the 2020 campaign, much of the questions surrounding Tim Walton’s softball program came from within a Kelly-Barnhill-less circle. However, 12 games into the season, we are beginning to see Walton’s remedy: pitching for contact.

While the Gators have talent and depth in the circle, there’s an understanding that none of the pitchers on Florida’s staff have the arsenal of pitches that Barnhill did. And that’s okay.

Junior RHP Natalie Lugo and rookie lefty Rylee Trlicek have split time in the circle for the Gators with 27.2 IP and 21.2 IP, respectively. Both pitchers have kept their ERA under two — which has been the goal for Walton.

There have been 263 at-bats against the Gators. Just 74 of those have ended in strikeouts. But impressively, Florida’s defense has allowed just 54 hits.

While Florida’s pitching staff might not be the scariest, those fielding behind the circle are.

As a unit, the Gator defense has amassed 219 putouts. On first base, Kendyl Lindaman is accredited for 71 of them. The Gators have also turned 12 double plays on the season with shortstop Sophia Reynoso, second baseman Hannah Adams and Lindman each contributing to four of them.

Florida’s .990 fielding percentage ranks as the fifth-best in the country.

Walton said in the preseason that he expected to see his lineup really produce from the plate. And so far, the Gators have all but disappointed.

When you look at the Gators’ typical starting lineup, 7-9 batters are hitting over .300. Fresh face and self-proclaimed “professional hitter” Charla Echols is leading the way for Florida’s lineup. Through a dozen games, the Michigan State transfer boasts a .500 average with 36 at-bats. Echols’ 18 hits rank her third in the country in total hits. Even more impressive, Echols has scored a teammate on each of her hits — giving her the second-most RBIs in the nation.

The Gators’ leadoff hitter Hannah Adams nears a .500 average with a .455. The junior second baseman has 15 hits on the season with six RBIs.

Meanwhile, senior Kendyl Lindaman currently holds an 11-game hitting streak. With a .394, two of Lindaman’s 13 hits went for two-bags and one for a home run.

Echols, Adams and Lindaman have each reached base safely in every game this season.

Wednesday’s game against the Dolphins will wrap up Florida’s eight-game home slate as the Gators travel to California for the Mary Nutter Collegiate Classic this weekend.

Ainslie is a journalism major at the University of Florida where she specializes in Sports Media. Her main passion is college football as it was a huge part of her childhood. Ainslie serves as a current correspondent for the Ocala Star-Banner, a newspaper for the Ocala, Florida area. She currently covers Marion County high school sports.
Previous New Franchise Record for the Tampa Bay Lightning
Next Vanderbilt, Tennessee Square off for In-State Showdown