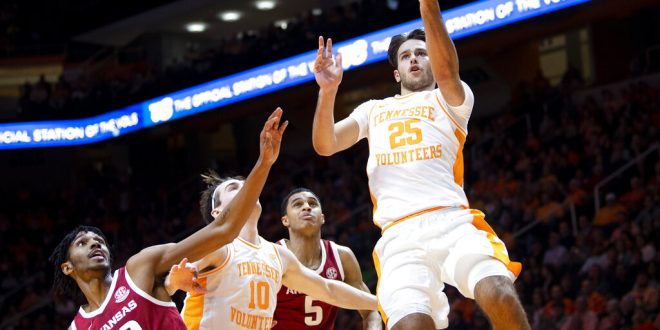 Tennessee and Vanderbilt are separated by 181 miles and they’re fighting to achieve different goals when they meet Tuesday in Knoxville for a 6:30 p.m. tip on SEC Network.

These fine-looking gentlemen will be in attendance tomorrow night vs. Vanderbilt.

Tennessee currently sits in seventh place in the SEC with a 6-6 conference record. And despite a mediocre performance in conference play, the Vols only trail first-seeded Kentucky by four games.

It would take several favorable results for Tennessee to make a run to the NCAA Tournament, but the Vols can not be excluded from tournament talk. At least not officially.

On the contrary, it’s safe to say that Vanderbilt is eliminated from post-season tournament consideration. Vanderbilt carries a 1-11 conference record and a 9-16 record overall.

While that may appear to be putrid to the college basketball layperson, it has to be said that the 2018-2019 team went winless in conference play. Vanderbilt’s win over then 18th-ranked LSU is monumental for Jerry Stackhouse and company in his first season roaming the sideline for the Commodores.

WHAT A WIN FOR THE COMMODORES! 💪

Despite great success in 2018-2019, this year’s version of Tennessee basketball did not garner high expectations.

Three players were selected in the 2019 NBA Draft, three graduated and two transferred. Losing that amount of talent is enough to hurt any college basketball program not considered to be a blue blood.

Three Tennessee Volunteers picked in the NBA Draft and none of y'all are going to steal my joy pic.twitter.com/hRRbdKNjvw

Despite the exodus of talent, the Vols’ roster boasts eight upperclassmen. Elder statesman Lamonte Turner was expected to lead the Vols but was sidelined with a shoulder injury after the Dec. 21 game against Jacksonville State.

Before his injury, the senior led Tennessee to an 8-3 record with wins over two ranked teams.

In Turner’s absence, senior Jordan Bowen has paced Tennessee in points-per-game with 12.9. Junior forward John Fulkerson adds 12.8 points and leads the team in rebounds with 6.2 per game.

The Vols hope to rebound from a heartbreaker in South Carolina, as they had possession and a one-point lead over the Gamecocks with 24 seconds left before freshman Santiago Vescovi turned the ball over. South Carolina’s Maik Kotsar took the lead with a pair of free throws and the Vols didn’t see the lead again.

A win over Vanderbilt is a must, as the Vols need every win they can get in order to continue building their résumé for March. The Vols likely need to beat a few ranked teams in order to boost their hopes.

Somewhere – it could be here – Frank Booker is smiling. South Carolina with a big win over Tennessee, 63-61 pic.twitter.com/2NXVLgjWWV

It was no secret that Jerry Stackhouse would have his hands full when he took the head coaching job at Vanderbilt. The team went winless in SEC play last year and lost its best player in Darius Garland, who played in just five games, to the draft. Saben Lee and Aaron Nesmith gained great experience last year in Garland’s absence and both have led the Commodores in scoring this year.

Nesmith’s 2019-2020 campaign came to a crashing halt when a foot injury ended his season. Since then, Lee and Scotty Pippen Jr. lead the team in scoring and helped notch the university’s first SEC win in 26 games.

Saben Lee scored 20 or more for the fourth consecutive game and the ninth game this season.#StackhouseEra | #AnchorDown pic.twitter.com/W40CJUL4aM

Since that 99-90 win over LSU, the Commodores have lost three straight. They most recently lost to the Florida Gators, 84-66, on the night when Billy Donovan Court was revealed.

The Dores are fighting to establish SEC credibility and notch a few more conference wins before the season concludes in a few weeks.