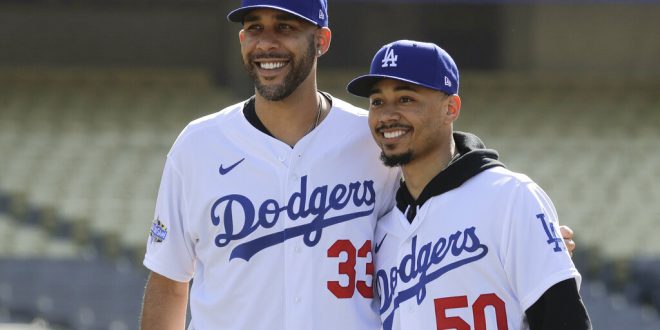 Dodgers ready to move on

Despite learning that the Astros cheated in the 2017 World Series to win, the Dodgers are ready to focus on the season ahead.

Pitchers and catchers have practiced for about a week now as more position players join them to prepare for their first spring training game this Saturday.

Earlier this month, Boston traded outfielder Mookie Betts and pitcher David Price to LA in order to create some payroll flexibility for Boston.

Adding two star players to LA’s roster alongside of Cody Bellinger, Ross Stripling and Clayton Kershaw have made the team a force to be reckoned with.

After some Dodgers players expressed how they felt about the Astros cheating scandal, Manager Dave Roberts said he’s ready leave that behind him.

Despite the loss in 2017, Roberts is more focused on the now than the past.

“Our expectations and goals don’t change,” said Roberts. “How we go about it matters. If you look at the last four or five years we’ve won more baseball games than anyone in baseball and that means something. [It’s] just the challenge of essentially putting the blinders on and now it’s time to play baseball and get better each day.”

The Astros traded Dodgers infielder Tyler White in July. White made his debut with Houston in 2016 and is the only position player on the Dodgers who appeared in games with the Astros in 2017.

For the last month he’s been surrounded by current teammates putting his former teammates on blast for their illegal sign stealing.

When asked if White benefited from sign stealing that season, he did not provide a direct answer. Instead he emphasized that he did not spend much time in the major leagues during that season.

“Did I use it? I really wasn’t there that year,” White said.

Now, White would like to join Roberts along with the rest of the team and move on from the matter to focus on the upcoming season.

The Dodgers will be taking on the Giants on Saturday, Feb. 22 at 3:05 pm in Scottsdale Stadium.