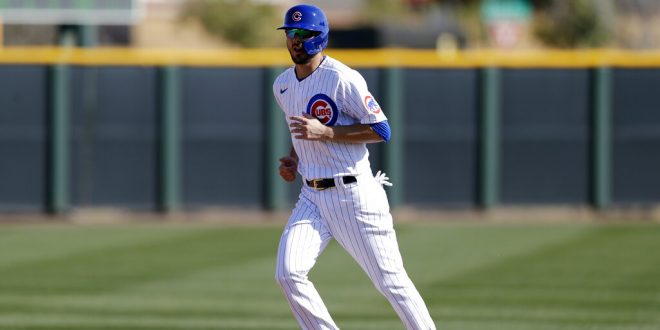 Kris Bryant, the third baseman and outfielder for the Chicago Cubs, has expressed his desire to remain with the team. Bryant has arguably been the strongest asset to the Cubs program since 2015. He’s hit 138 home runs in the 706 games he’s played during his career in Chicago. But the team missed the playoffs last season for the first time since he’s been with the club. And despite rumors that big changes were coming this offseason, Bryant made clear that he wants to stay with the Cubs.

Bryant is nothing short of talented and has been a huge benefit to the Chicago Cubs. Most notably, he helped the team win the World Series in 2016. It was the first time the Cubs brought the title home since 1908. But more than that, he’s been critical to the team both on the field and at-bat. The 28-year-old has 751 hits under his belt. What’s more, he was the 2015 National League Rookie of the Year and the 2016 National League MVP. It’s quite a resume, and he quickly became a fan favorite. This season, he will be earning $18.6 million.

But the Cubs saw a less than stellar 2019 season. They clinched 84 wins, but it wasn’t enough to get them to the playoffs. It sparked rumors that changes could be coming to the club, including one the Bryant may be traded.

Despite the speculation, Bryant made it clear to reporters that he wants to remain a Cub.

The Cubs announced that a change would be made to the batting order. To start off the upcoming season, it’s Bryant who will be the lead-off batter. In the past five seasons, his batting has remained steady. He’s seen a .284 batting average during his time in the MLB. It’s a smart move for the Cubs to announce during this offseason.

Bryant has plenty of talent around him, too. First baseman Anthony Rizzo and shortstop Javier Baez have made their individual marks on the team. Bryant commented on the talent that surrounds him.

With a roster stacked with skill, and with the notion that Bryant wants to stay in pinstripes, fans are hoping for a season that extends far into October.