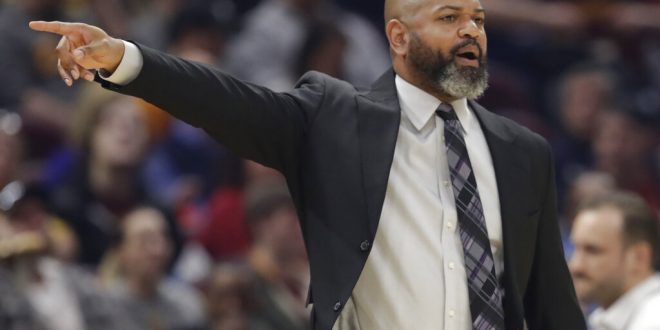 Cleveland Cavaliers head coach J.B. Bickerstaff gives instructions to players in the first half of an NBA basketball game against the Miami Heat, Monday, Feb. 24, 2020, in Cleveland. (AP Photo/Tony Dejak)

The Cleveland Cavaliers have struggled severely during the NBA regular season. Cleveland has lost seven of their last 10 games and hold the worst record in the Eastern Conference sitting at 16-31. Despite their struggle, during Monday night’s match up with the Miami Heat they stunned in a comeback victory to defeat the Heat 125-119.

The @cavs overcome a 19-point deficit entering the 4th quarter to stun the Heat.

It was a career night for Cleveland’s rookie Kevin Porter Jr. who dropped 30 points. Porter Jr. also added eight boards and three assists to his stat line. Although he led the way for the Cavs, the offense was fairly well spread out. Veterans Kevin Love (17), Andre Drummond (13) , Tristan Thompson (15) and Larry Nance Jr. (16) all scored in double digits.

With a 22 point lead late in the third quarter, it seemed as if the Heat were going to secure a road win. Instead, they continued their adversity away from American Airlines Arena in what was arguably their worse loss of the season.

Heat Big man Bam Adebayo on the game last night, “It don’t get no worse than this.”

Miami has struggled on the road with a 13-18 overall record and they are 4-11 their past 15 road games. This was also the Heat’s first overtime loss of the season, dropping them to 8-1 overall in this category.