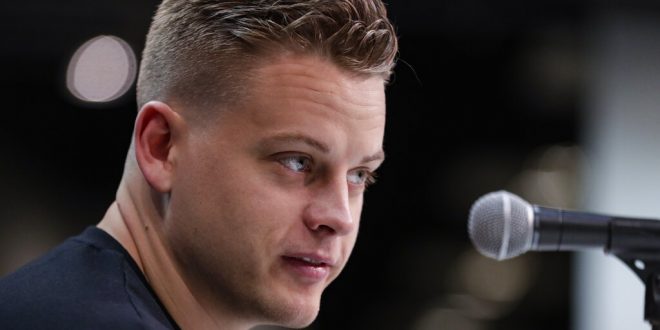 Joe Burrow used grit, skill and a little bit of swag to lead LSU to a National Championship. He brought those same qualities to the pre-combine interviews and measurements but won’t partake in any drills.

A lock to go first overall?

Burrow had arguably the best single-season of any college football player… ever. Shattering numerous offensive records, taking home the Heisman and leading his team to the national championship, Burrow has been the favorite to go number one for quite some time.

After finishing the season 2-14, the Cincinnati Bengals sit with the number one pick. Burrow is from The Plains, Ohio, just over two hours away from Cincinnati. All signs point to the Bengals taking Burrow. Despite reports saying Burrow shouldn’t play for the Bengals, the kid from Ohio is just ready to play football again.

Joe Burrow said he wouldn’t partake in any combine drills but did announce he will work out at LSU’s pro day. Still, the expected number one overall pick came to Indianapolis to speak to teams and record his measurables. What stuck out to teams, Burrow’s small hands which were measured at nine inches.

This measurement is tied for the smallest among first-round quarterbacks since Ryan Tannehill in 2009. Thirty-five quarterbacks have been drafted in the first round since 2008. The average hand size amongst those quarterbacks was 9.7 inches. The most recent Super Bowl-winning quarterback, Patrick Mahomes, had his hands measured at 9.25 inches.

Only three quarterbacks with nine-inch hands have attempted at least 300 passes over the past 10 years: Jared Goff, Ryan Tannehill and Chad Henne. What do all these stats mean? Probably nothing. Burrow was dominant this year and his play against elite college defenses should translate to the next level.

Why worry about 9 inches when Joe Burrow can do thispic.twitter.com/8dov9KpYqi

The 2020 NFL Combine drills begin tomorrow. Teams will make decisions for their futures based on athleticism drills, mental knowledge for football and physical attributes. However, the work out warriors will improve their draft stock; the power players’ skills may not suit the combine, lowering their draft stock. Whatever the case is, all eyes will be on the football field once again.