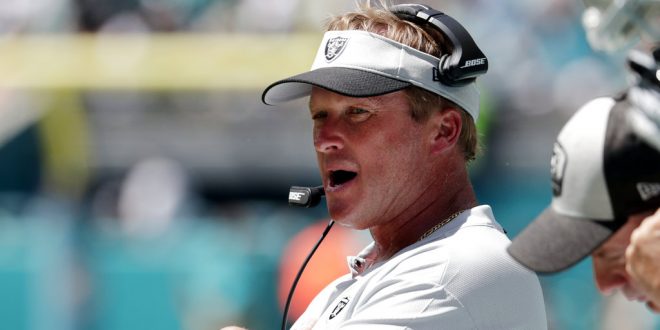 The Las Vegas Raiders look to win big in their first season away from Oakland.

The Silver and Black were thoroughly in the playoff race last season, starting 6-4, but closed out its final six games with one win.

Despite the 2020 season not starting in a little over six months from now, the NFL is alive year-round. With the NFL Combine starting and the NFL Draft and free agency on the horizon, the Raiders see an opportunity to improve on their 7-9 season.

A New Home to Defend

Moving to a new city means a new stadium. The Las Vegas Raiders’ new home will be in the Allegiant Stadium. The 65,000-seat stadium should be completed in July 2020 before the start of the next season.

Jon Gruden, who is going into his third season as the head coach of the Raiders, sees it as another reason why the Raiders will be a top destination in free agency.

The Raiders have two first-round draft picks in the 2020 draft with the 12th and 19th pick.

After trading Amari Cooper to the Dallas Cowboys and Antonio Brown not working out, Gruden knows the Raiders need to find a go-to wide receiver this offseason.

In the 2019 season, the Raiders did not have a single wide receiver with more than 700 yards.

Multiple mock drafts have the Raiders drafting a wide receiver with one of its first two picks.

Although it is no secret the Raiders are looking at wide receivers, Gruden is keeping his options open on both sides of the ball with his two first-day draft picks.

Despite Derek Carr having back-to-back seasons with over 4,000 yards and having the ninth-best QBR in the NFL last year, the Raiders are reportedly favorites to sign Tom Brady and Philip Rivers.

However, Gruden recently backed Carr as the Raiders’ quarterback of the future and looks forward to building around him.