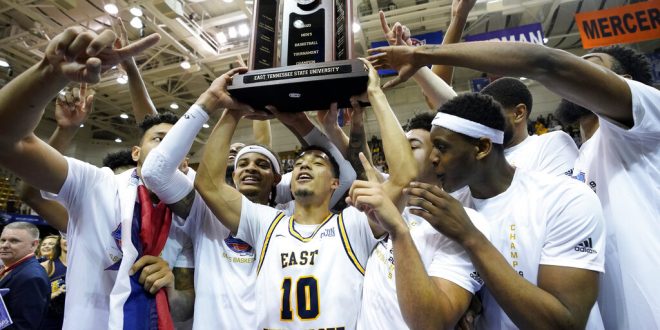 East Tennessee State secured its spot in the 2020 NCAA Tournament on Sunday night, defeating Wofford 72-58 in the Southern Conference Championship on in Asheville, NC. Senior guard Isaiah Tisdale led ETSU with 24 points and shot 4-7 from beyond the arc.

It is East Tennessee State’s eighth conference championship title, which puts the Buccaneers second in the Southern Conference behind only Chattanooga with 11. ETSU will make its second tournament appearance in five years under head coach, Steve Forbes. The Buccaneers’ most recent tournament appearance was in 2017 when they suffered a first-round loss as a 13 seed to Florida. However, ETSU may struggle with a lack of tournament experience as 7-footer Lucas N’Guessan is the only player from that 2017 team who is still on the roster.

In his most recent projections, ESPN’s Joe Lunardi predicts ETSU will be an 11 seed in the East Region.  This means they would likely need to beat a six seed and a three seed in order to advance to the sweet sixteen. As of now, Lunardi predicts ETSU will face a battle-tested Michigan team in the first round. That being said, a lot could change from now until Selection Sunday as all power conference tournaments are scheduled for this week.  Still, an 11 seed is very high for a mid-major team as most mid-majors fall between 12-16.  Steve Forbes said the team’s automatic tournament bid is “awesome for these kids” to have seven days off without the stress of sitting on the bubble.

ETSU enters the tournament with a 30-4 overall record (4-0 at neutral locations). It should be noted, however, that the Buccaneers have just one quadrant 1 win this season thanks to a road victory over LSU. Its only other quadrant 1 matchups were away games against Kansas and Furman, both of which resulted in ETSU losses.

The Buccaneers boast a very balanced offense, led by a trio of guards averaging in double figures scoring.  Fortunately for ETSU, its next four scorers combine for nearly 35 points a game.  Steve Forbes pointed to the team’s depth as the reason for much of its success.  Following the win over Wofford, Forbes said, “tonight was [Isaiah] Tisdale, yesterday was [Daivien] Williamson.”  This type of scoring depth is crucial in the tournament, particularly late in games if a team runs into foul trouble.

ETSU ranks 15th in the nation in field-goal percentage at 47.5%. Despite the team’s efficiency from the field, the Buccaneers have struggled at the foul line this year. The team is currently shooting under the 70% mark from the line. That ranks them outside the top 200 among Division I teams. This is a concerning statistic, considering how critical it is to convert free throws in March.

Hello, I am currently a junior at UF studying sports media journalism with a concentration in Political Science. I contribute web and radio content weekly for WRUF ESPN Gainesville. Be sure to check out some of my recent articles!
Previous UNC Basketball enters ACC Tournament in unfamiliar territory
Next Reactions to NBA Coronavirus Guidelines