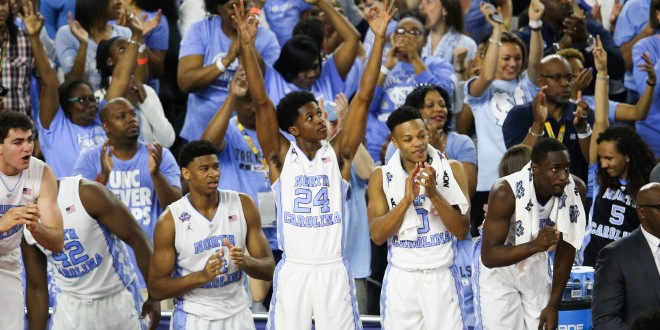 If the 2019-2020 collegiate basketball season has proved anything thus far, it’s that nothing is for sure.

A storied program that is typically etched in stone on virtually every March Madness bracket, UNC enters the ACC Conference Tournament with the last seed.

Typically, UNC has already secured a spot in the NCAA Tournament. But this season has been anything but typical.

While other schools are punching their tickets to the NCAA Tournament, the Tar Heels will likely have to fight and claw their way to an ACC Tournament championship in order to secure a tournament berth.

That means that Roy Williams and company have to win five games in five days.

Based on past success, the North Carolina men’s basketball program ranks comfortably among the “blue bloods” of college basketball.

The Tar Heels boast 48 NCAA Tournament appearances, 20 Final Four appearances and six national titles and reign as one of the three most successful college basketball programs along with UCLA and Kentucky.

In addition to great NCAA Tournament success, UNC boasts even greater success within its conference.

Incredibly, since the ACC Tournament’s inception in 1954, North Carolina has never entered with the last seed.

That 66-year streak is gone.

Williams, who began his head coaching career at Kansas in 1988, has never finished with a losing record.

With an 884-252 all-time record, Williams has only finished the season unranked four times. He has missed the NCAA Tournament just twice.

Not only is this season highly unusual for UNC, it’s utterly unheard of for a Roy Williams team.

Roy Williams: "You look at the standings? We're last. I've never been freaking last at anything in my life:"

North Carolina entered this season with considerable hype, as the AP and Coaches’ Polls placed the Tar Heels at nine and 11, respectively.

Despite the hype, UNC finished the regular season unranked. To make things worse, they rank 261st in the nation in field goal percentage, 315th in three-point percentage and 130th in points per game.

There are a few explanations for such a lackluster season.

The Tar Heels were plagued by injuries and relied on inexperienced play and a supposed lack of talent.

In addition, UNC returned just one starter after losing in the Sweet 16 in 2019. Notable freshman stars Coby White and Nassir Little chose to leave school early in favor of the NBA Draft. Losing five major contributors does not bode well for any program.

The combination of attrition from last year’s team and injuries to starters Cole Anthony and Brandon Robinson has led to 10 different starting line-ups throughout the season.

Cole Anthony has struggled at the rim this year but it’s finishes like these that create hope/optimism he’ll improve with more spacing pic.twitter.com/WEYaRiHI9Y

Despite the underwhelming results achieved during the entirety of the season, the Tar Heels won three of their final four games.

Despite a regular season finale loss to arch-rival Duke, Cole Anthony believes his team has the ability to make up for a poor regular season by extending UNC’s NCAA Tournament appearance streak to 10.

They’ll first have to beat Virginia Tech in the first round of the ACC Tournament before considering any type of run. The two teams last met on Jan. 22 when the Hokies bested the Tar Heels in double overtime.

I’ll be honest. I’m excited for the start of the ACC Tourney, & the Tar Heels’ game against VT, in particular. It’s been a rough season. I get it. But I’m as proud to be a #UNC fan as I’ve ever been, & no amount of trash talk or disrespect from other fan bases will change that. pic.twitter.com/YPnmTMUU4V

Previous No.13 Georgia vs No.12 Ole Miss Open Up SEC Men’s Basketball Tournament
Next ETSU wins Southern Conference title to punch its second ticket to the NCAA Tournament in five years