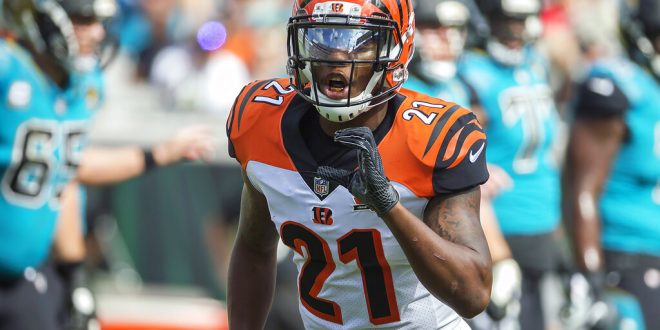 FILE - In this Nov. 5, 2017, file photo, Cincinnati Bengals cornerback Darqueze Dennard (21) calls a formation to the defensive backs during the first half of an NFL football game against the Jacksonville Jaguars in Jacksonville, Fla. The Jacksonville Jaguars and Dennard have parted ways nine days after agreeing to a three-year, $13.5 million contract in free agency. The Jaguars said Thursday, March 26, 2020, “the two sides could not come to an agreement on the final contract terms. (AP Photo/Stephen B. Morton, File)

Cornerback Darqueze Dennard will not be signing with the Jacksonville Jaguars after a mutual contract disagreement.

Pretty wild: The #Jaguars will not sign ex-#Bengals 1st round pick, CB Darqueze Dennard. Reports were last week that both signed agreed to a three-year, $13.5 million contract but the two sides couldn't finalize it and Dennard is now a regular free-agent again.

In a statement Thursday, the Jags franchise summed up fan’s confusion.

“… The two sides could not come to an agreement on the final contract terms,…. He remains an unrestricted free agent.”

Before it fell through, the contract agreement was for three years, which included a total deal of $13.5 million with $6 million guaranteed.

Expected Role on the Team

If he had followed through with the Jags contract, Dennard would have filled the outside corner spot that was previously occupied by AJ Bouye. Bouye was traded just last week in the fourth round to the Denver Broncos.

ESPN’s Mike DiRocco explains that this team would have given Dennard a chance to be a starter.

The team also lost another outside corner last October when Jalen Ramsey was traded to the LA Rams.

This leaves the Jags team with only two veteran corners, including Tre Herndon and DJ Hayden.

Prior to the failed contract, Head Coach Doug Marrone explained that Dennard would be a great addition to the roster.

“He’s a press corner and wants to play outside. He wants to prove that he can do it, and we believe that he can, so it was a good fit for us. D.J. Hayden is our starting nickel corner. I talked to D.J., and we’re extremely happy with him in that spot.”

Time on the Bengals

Dennard has spent his entire football career with the Cincinnati Bengals up until this point. Back in the 2014 NFL draft, he was selected first round. In his latest 2019 season, he, unfortunately, had to sit out the first six games after undergoing knee scope surgery.  However, he did appear in nine games, with 37 tackles and five pass defenses.

Per @RapSheet the Jaguars are signing CB Darqueze Dennard