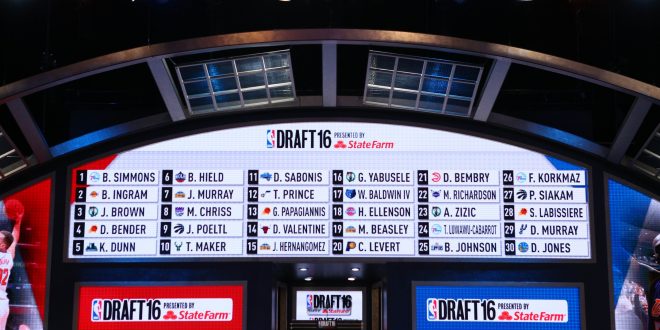 Jun 23, 2016; New York, NY, USA; A general view of a video board displaying all thirty draft picks in the first round of the 2016 NBA Draft at Barclays Center. Mandatory Credit: Jerry Lai-USA TODAY Sports

The 2020 NBA Draft, originally scheduled for June 25, will likely be postponed according to ESPN NBA Insider Adrian Wojnarowski.

On March 11, the NBA officially suspended the regular season after a player tested positive for the coronavirus.

The NBA shutdown with a little over a month before the playoffs. The 2020 NBA Playoffs were set to start on April 18.

The NBA shutdown with a little over a month before the playoffs.

However, NBA commissioner Adam Silver proposed numerous ways the league could return. In addition, Silver stated the league would return once public health officials give the “OK”.

The league expects to continue on with the regular season. There is no set date for the NBA’s return, but the league is hopeful to return by June.

Uncertainty around the number of regular-season games before the playoffs makes it difficult to set a date for the draft.

Wojnarowski told Sportscenter he believes the draft can’t happen during the regular season or playoffs.

Currently, the league hasn’t set a new date for the draft.

The cancellations of every college basketball tournament across the country have altered the NBA Draft.

Currently, the deadline for early entry into the draft is April 21. However, with the draft happening at an unknown date many are asking the league to push back the deadline.

All prospects must give their intent 60 days before the draft.

Florida Gators to the Draft?

An abrupt halt to the Florida Gators basketball season might influence the decision of some current Gators.

Graduate student Kerry Blackshear Jr. and sophomore Andrew Nembhard have also yet to announce their decision. Both declared for the 2019 NBA Draft but returned to Florida for the 2019-2020 season.