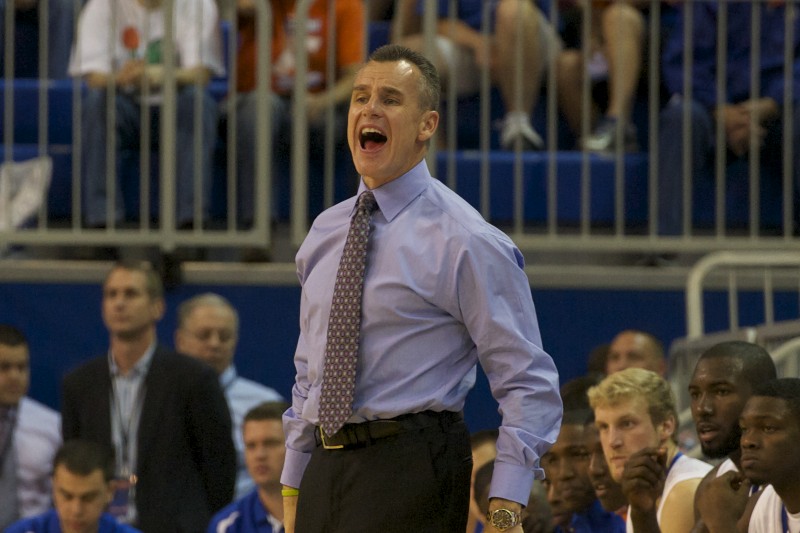 13 years ago to the day, Florida was atop the college basketball world again. The Gators beat Ohio State 84-75 in the Georgia Dome, making them back-to-back champions, after winning the tournament in 2006. No team has gone back-to-back since those two Billy Donovan squads led by future pros Al Horford, Joakim Noah and Corey Brewer.

Men on a Mission

After beating UCLA to win the 2006 national title, Joakim Noah, Al Horford and Corey Brewer all had NBA draft buzz. The trio saw an opportunity to do something special, though, and things turned out pretty well for Billy Donavon and co.

The return of those three, along with fellow starters Taurean Green and Lee Humphrey, made for sky-high, repeat-or-bust expectations.

Gators play-by-play announcer Mick Hubert recalls the fanfare that the 2006-2007 team gathered on its quest to repeat:

The Gators tipped off 2007’s Final Four against the #2 seed UCLA Bruins, whom they defeated in 2006’s national title game. UCLA was led by future pros Aaron Afflalo, Darren Collison, Luc Richard Mbah a Moute and Russell Westbrook, who was a freshman coming off the bench.

The game started out a defensive slugfest, as the Bruins relied on a stifling defense all season. The Gators were strong on defense as well and led just 9-6 after ten minutes of play. Neither team was really able to get much going in the first half, and Florida held a 29-21 lead at the break.

UCLA scored four quick points after the break to cut the lead to 29-25, and then Lee Humphrey got going. The senior hit two of his four big threes within the first four minutes of the second half to give Florida some breathing room.

Florida’s defense remained stout throughout, and the lead grew to 47-30 at the 13-minute mark. The Gators moved onto the national championship game with a 77-66 victory, beating the Bruins by double digits for the second straight season.

After Gator football trounced Ohio State 41-14 in the 2007 BCS national championship game, the same two schools squared off with the basketball championship on the line.

The game was tight for most of the first half, with the Gators largely limiting the Buckeyes outside of Oden. Florida’s lead grew to double digits with three minutes left in the half, from a deep Taurean Green three. The Gators took a 40-29 lead into halftime.

The Buckeyes were able to get more going on the offensive end in the second half, but the Gators responded blow for blow. A key moment came when Greg Oden blocked Al Horford’s shot, but Florida secured possession and extended the lead to 11 on a deep Lee Humphrey three.

Oden continued his strong night with 25 points and 12 rebounds, but it wasn’t enough. The closest the Buckeyes were able to cut Florida’s lead to was 66-60 with five minutes remaining, and Taurean Green sunk their hopes with another demoralizing three.

Florida won 84-75 and was led in scoring by Al Horford, who finished with 18 points despite being guarded by Greg Oden for much of the game.

Billy Donavan and the Gators cut the nets down once again, and remain the last program to win back-to-back NCAA tournament titles.

Being mentioned with guys like Oscar Robertson, Magic Johnson, and Jason Kidd was something that …