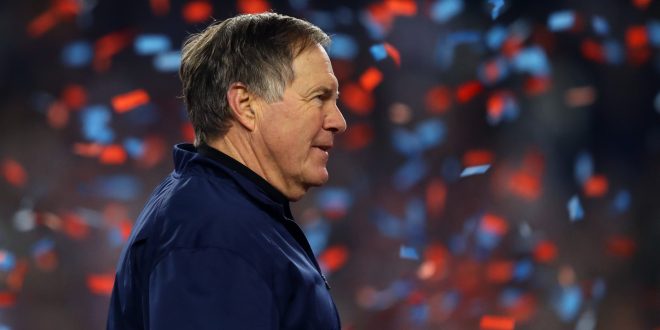 Bill Belichick and the Patriots Ready to Move Forward

It’s been almost four weeks since Tom Brady officially signed a two-year deal with the Tampa Bay Buccaneers. The six-time Super Bowl champion and 14-time Pro Bowler leaves a massive hole in the New England Patriots’ offense. Patriots head coach Bill Belichick said “it would be of course impossible to sum up everything that Tom did in 20 years into a comment.”

That being said, if there is any coach capable of rebounding from the loss of perhaps the greatest quarterback of all time, it’s Bill Belichick. His composure and intelligence are unparalleled among the league’s coaches. Since 2008, the Patriots are 13-6 in games Brady did not start either due to injury or suspension.

The Patriots currently have two questionable options at the quarterback position for the 2020 season: Jarrett Stidham and Brian Hoyer. Stidham was a fourth-round pick out of Auburn in last year’s draft. Meanwhile, Hoyer is approaching 35 years of age and has played for eight different teams in the past decade.

In any case, Bill Belichick has expressed his confidence in whichever quarterback the team names as its starter. Belichick said “each quarterback has a different skillset,” but he assured the Patriots will “make things work smoothly and efficiently” by featuring  “whatever things that particular player does well.”

The Patriots currently hold the 23rd pick in next week’s virtual NFL Draft. Unfortunately for New England, the consensus top three quarterbacks in this year’s draft class are projected as early first-round selections. This means the Patriots will need to trade up if they want to steal a big name like Joe Burrow, Tua Tagovailoa or Justin Herbert.

Theoutbreak of COVID-19 has forced teams to meet with prospects virtually rather than face-to-face. Despite this, Belichick feels the Patriots have adjusted to the unprecedented circumstances well. He said the team has “talked to as many if not more players than [they] have in the past” due to the convenience of phone calls and video conferences.

Regardless of who replaces Tom Brady moving forward, the Patriots are ready and willing to face the challenge.

Hello! I am a sophomore at UF studying journalism sports & media. I help contribute radio and website content for ESPN Gainesville. Additionally, I am a sports writer for The Independent Florida Alligator and help cover the UF women's basketball team. I am also the UF softball beat reporter for ChompTalk.com.
Previous Steve Spurrier talks the end of the XFL
Next NFL Draft: Saban on Tua Tagovailoa