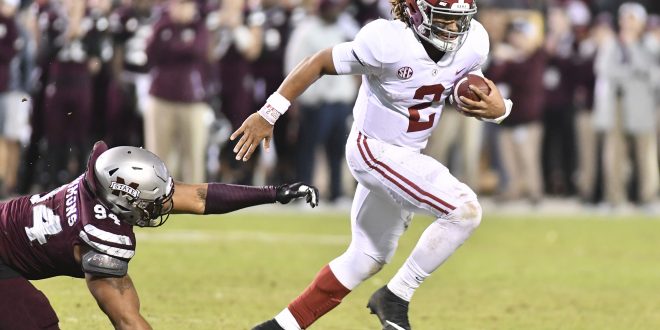 Where will Hurts play next?

As of now, Jalen Hurts looks to not be drafted as a starting quarterback in the upcoming NFL draft. However, while he may not entirely fit the mold of today’s prototypical NFL starting quarterback, he has a skill set that can be developed at the NFL level. This sets him apart from the rest.

The 6-foot-1, 222-pound athlete will be the third Oklahoma quarterback drafted. But, he won’t be following the lead of back-to-back No. 1 overall picks Baker Mayfield and Kyler Murray.

Which round will Hurts be selected?

Joe Burrow, Tua Tagovailoa and Justin Herbert are the top-tier quarterbacks that will be selected in the first round this year. The Cincinnati Bengals look to pick Joe Burrow with the first overall pick. After that, the Miami Dolphins and the Los Angeles Chargers look to sign Tua and Herbert. Despite New England losing their star quarterback, they will probably use their 23rd pick to select a prospect like Love or Fromm.

Hurts is a second-tier prospect along with Jordan Love, Jacob Eason and Jake Fromm. With this competitive group, he could end up being the seventh quarterback drafted. Teams like the Detroit Lions could use Hurts on their roster since this is Matthew Stafford’s final season with the team. The Lions may select Hurts early in the fourth round and have him mentor under Stafford.

Hurts comments on what he brings to the table

Few quarterbacks have a college career story like the one Hurts can tell. He’s had a successful career as a star quarterback at both Alabama and Oklahoma and his constant strive to be better himself is noticeable.

Hurts is aware of the talent he would bring to any team.

For now, he is working to get better for the draft which takes place April 23-25 in Las Vegas.

Previous Jim Kelly on Tom Brady Leaving the Patriots, “We’ll See him in the Super Bowl”
Next Jeff Okudah prepares for NFL Draft