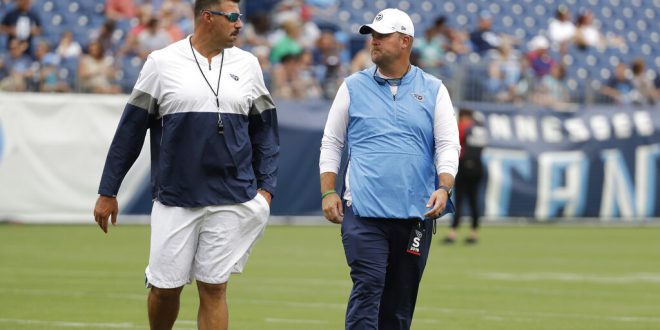 FILE - In this Aug. 3, 2019, file photo, Tennessee Titans coach Mike Vrabel, left, and general manager Jon Robinson walk on the field before a practice in Nissan Stadium during NFL football training camp in Nashville, Tenn. Robinson, hired in January 2016 to rebuild a team that won five games combined the previous two seasons, finds himself needing to retool the roster for Vrabel. “We have to add pieces to the team," Robinson said. "We have a lot of good football players on this football team that have bought into the philosophy of how we want to play the game, to the culture that we have here in Nashville, and we've got to continue to add pieces to this core.” (AP Photo/Mark Humphrey, File)

As the NFL prepares for the start of the 2020 draft on Thursday, questions circle around the Tennessee Titans. The reigning AFC runners-up hold the 29th pick in the first round, but trading down is not out of the equation. Titans general manager, Jon Robinson, said if they can “slide back a few and pick up some extra picks,” then it proves the team is “more than open for business when it comes to navigating around the draft board and positioning ourselves to get as many picks as possible.”

After the first round, Tennessee has only three draft selections before the seventh round. Therefore, trading down to acquire a handful of mid-round picks is a viable option if the Titans do not love their options after the first 28 picks.

Robinson said the front office has “talked through different scenarios” to prepare for their first round selection.

One of these scenarios entails another team calling the Titans to trade up for their draft pick. In this case, Tennessee must predict whether the player they are targeting will still be available if they trade down. Regardless of how the Titans handle their first-round pick, don’t be surprised if they target a cornerback. Veteran Logan Ryan will likely walk this offseason, which puts a lot of pressure on Malcolm Butler and Adoree’ Jackson. If the Titans are serious about taking down the Patrick Mahomes and the Kansas City Chiefs, they certainly need to add depth to the secondary.

The Titans need to address several vulnerable positions this offseason via draft or free agency. Jon Robinson expressed his confidence in Tennessee’s depth in the trenches. However, the departure of defensive tackle Jurrell Casey leaves a void in the pass rush. Despite the addition of Vic Beasley, the Titans need a true defensive lineman like free agent Jadeveon Clowney to replace Casey. When asked about Clowney, Robinson said Tennessee’s draft picks “could potentially impact” the Titans’ pursuit of the three-time Pro Bowler.

Hello! I am a sophomore at UF studying journalism sports & media. I help contribute radio and website content for ESPN Gainesville. Additionally, I am a sports writer for The Independent Florida Alligator and help cover the UF women's basketball team. I am also the UF softball beat reporter for ChompTalk.com.
Previous 2020 NFL Two-Round Mock Draft
Next Ngakoue’s Feud With Jags Goes Public