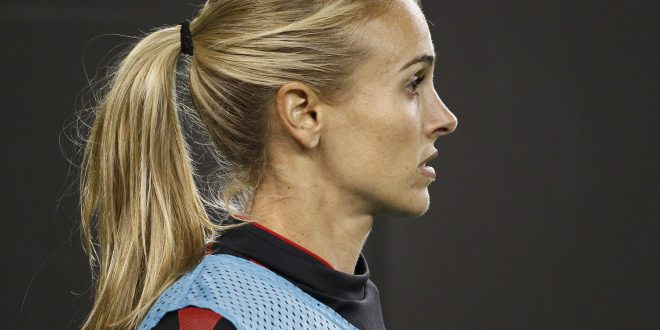 Former Florida Gators Soccer player Heather Mitts has garnered an incredible amount of titles during her career. During her time at Florida, she helped the team earn four SEC championships.

As if being one of the best defenders in the world was not enough, she has also served as a studio soccer analyst for ABC, ESPN, and ESPN2 during the 2003 FIFA Women’s World Cup and was a sideline reporter for several MLS broadcasts. She is now a mother of three as well.

Mitts began her college career with Coach Becky Burleigh in 1996.

Mitts’ said, “I kind of took a chance at coming to the University of Florida, It was only their second year of existence my freshman year. But, I absolutely loved Becky and the support group and just the school in general. It felt like the right feel for me. I feel pretty fortunate to be apart of a team that won four SEC championships.”

Mitts’ was able to make incredible memories at Florida.

“The highlight of my college career had to have been having the opportunity to play against UNC at home. It was a packed house, people were even watching from the baseball stadium. We ended up losing to them 2-1 during the regular season and then to get another crack at them in the National Championship Game there my junior year and to be able to come out on top was pretty cool for me as a player and for the program.”

Special from the Start

Mitts’ lived a very athletic lifestyle from a young age. Her mother was talented in tennis, her father in basketball, and her brother was competitive in soccer. Mitts’ excelled in all three.

Although, according to Mitts, “when it came down to it, my mom wanted me to focus on one sport after my freshman year and I said I love soccer.”

Being apart of an active family helped her grow into a passion for competition.

“My brother is actually 18 months younger than me and we’d go out in the backyard and have these 1v1 battles. I’ve always loved competition and competing with him and that we would go out every day in our backyard,” explained Mitts.

Straight out of college, Mitts played for Tampa Bay Extreme in 2000 for the W-League. Then, once the new Women’s United Soccer Association league launched, she was drafted to the Philadelphia Charge where she became a WUSA All-Star in 2003.

Upon the establishment of the Women’s Professional Soccer league, she played with the Boston Breakers, Philadelphia Independence, and the Atlanta Beat. All of which was done in between her appearances with the U.S. women’s national team.

Mitts was able to compete in the 2004, 2008 and 2012 Summer Olympics, all three of the competitions she brought home gold.

“I was very fortunate to play past college. All three of the medals had different experiences. I had no idea I was going to make that 2004 team. I had kinda lucked out that there was an injury with Joy Fawcett who played center back and I went from only having two caps under my belt from then starting and playing every single game,” Mitts’ explained, “I didn’t think I was going to make that roster so I was happy to be there and I never thought I would be standing up on a podium winning a Gold medal.”

On May 12, 2007, Mitts tore her ACL in an international match with Canada.

“After I tore my ACL, I kinda felt my career might be over. But, I ended up being able to come back from that and actually ended up playing the best soccer of my life.”

Mitts explained that at the conclusion of the 2012 Olympics, she finally felt ready to retire.

“I was 35 when I retired, so I wanted to start a family. I had been doing long-distance with my husband at that point for 10 years,” she said.

Mitts felt she was ready and it was the perfect time to retire.

Although Mitts can’t see her teammates on the field anymore, they still keep in touch.

“Were actually doing a house party tonight,” she said. “I’m pretty excited about it, because of everything going on right now, they have been playing back some of the old games that we played in, and it’s going to be fun to rewatch with them. So, a bunch of us have been texting back and forth about the games for the first time in ages. I feel like I’ve forgotten so much of it. I don’t know if its motherhood or what. There was a game that was being replayed last night and I realized that I don’t remember what happened in that game at all. So it was fun to go back and rewatch and start remembering again.”

Off the Field Involvement

Mitts began a career in sports production after her time in college.

“Luckily, I was able to get my foot in the door right around the time that I was done playing college to come back and do some broadcasts at UF. That’s where it all started and it continued throughout my playing career. I just continued to dabble and keep my foot in the door. Its been fun especially now to have been away from the game but to go back and broadcast and to still be involved.”

Mitts’ was able to do work for  ABC, ESPN, and ESPN2 on multiple occasions both during her career in soccer and after.

Finally, Heather Mitts is now devoting her time to her family and coaching her Youth Soccer Camps. She is also an advocate for Women’s Empowerment, Equal Pay, and Human Health and Wellness all of which are featured on her website where she spreads awareness and organizes campaigns.