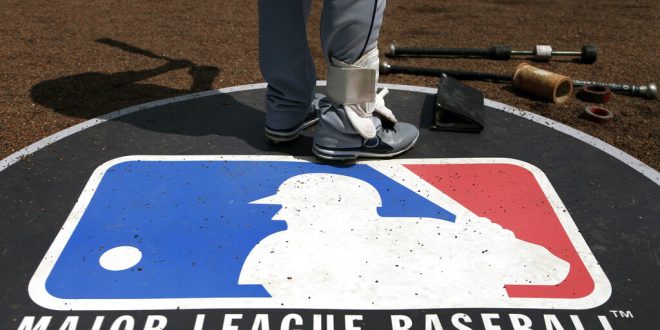 FILE - In this April 24, 2013, file photo, Cleveland Indians second baseman Jason Kipnis stands on the Major League Baseball logo that serves as the on deck circle during the first inning of a baseball game between the Chicago White Sox and the Indians, in Chicago. Major League Baseball rejected the players' offer for a 114-game regular season in the pandemic-delayed season with no additional salary cuts and told the union it did not plan to make a counterproposal, a person familiar with the negotiations told The Associated Press. The person spoke on condition of anonymity Wednesday, June 3, 2020, because no statements were authorized.(AP Photo/Charles Rex Arbogast, File)

Where are you MLB?

Another day goes by and still no decision as to when the 2020 MLB season will start. It has been nearly three months since we said a temporary goodbye to spring training, and now fans and players are growing restless waiting for a decision to be made.

While there have been multiple proposals put forth, this latest one might be the one to stick. This past Wednesday MLB Commissioner Rob Manfred met with union executive director (MLBPA) Tony Clarke, hoping to find a compromise. While the feeling remains optimistic, no deal has been finalized.

The conversation between the two men centered around a 60-game season. Games would start in mid-July and end September 27. The commissioner finally offered to pay the players their full prorated salaries, something they had decline to offer until now. This comes out to about 37% of their full-time salaries, with $25 million for postseason play, another $33 million in forgiveness on the $170 million advance they received in March.

The MLB proposal to the MLBPA, as @Ken_Rosenthal said, is for a 60-game season that ends around Sept. 27 and gives players fully prorated salaries. It would have expanded playoffs and would include waiving of right to grieve by the union.

Players have voiced their concern over a 60 game season, highlighting that 60 games would prohibit teams from playing a full season and therefore hurt their chances at the playoffs. Former Yankee first baseman, Mark Teixeira discussed how some teams like the Yankees and Dodgers may get an unfair chance to make it to postseason baseball.

MLB’s latest deal has offered to expand the postseason teams from 10 to 16. Teixeira highlighted how this will boost revenue and help both the owners and players. Even with the new deal being presented, there appears to be distrust between both parties. The players have to ensure that they are getting a fair deal, but they also have to trust the owners to deliver them a fair deal. ESPN MLB Reporter Jeff Passan explained the distrust between the players and the owners.

The back-and-forth between the MLB and MLBPA has been going on for weeks, with no end in sight. But maybe in the next few days, there will be an agreement made. Regardless, both parties have the same goal: a 2020 MLB season.