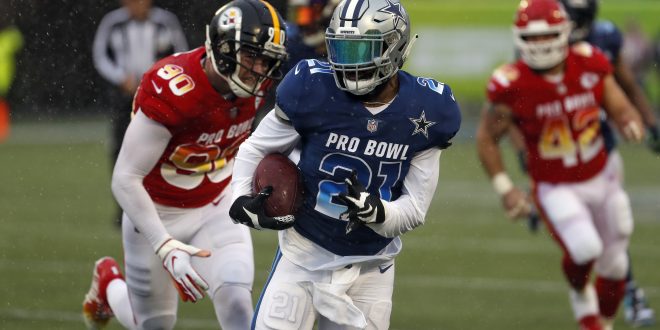 NFC running back Ezekiel Elliott (22), of the Dallas Cowboys, gets away from AFC linebacker T.J. Watt (90), of the Pittsburgh Steelers, during the second half of the NFL Pro Bowl football game Sunday, Jan. 27, 2019, in Orlando, Fla. (AP Photo/Mark LoMoglio)

The COVID-19 Pandemic has triggered the NFL to cancel the Hall of Fame Game between the Dallas Cowboys and the Pittsburg Steelers. The next HOF game will not be played until August 5, 2021. In addition, the Pro Football HOF postponed the enshrinement ceremony for this year’s Hall of Fame to August 7, 2021.

Cowboys and Steelers had been scheduled to report to training camp July 22 – six days ahead of most other NFL teams – because of the Hall of Fame game. But now their reporting date will be pushed back; question is whether others will, too.

The HOF game and induction ceremony are the first cancellations from the NFL. Many are hoping these will be the last. Although, this could be an indication that future adjustments are inevitable.

“The health and safety of our Hall of Famers, fans and volunteers who make Enshrinement Week so special remains our top priority,” said President of the Pro Football Hall of Fame, David Baker.

Furthermore, the NFL projects it will start its regular season on time. According to NFL’s Jeff Pash, the NFL advised training camps to reopen on schedule. NFLPA medical director Thom Mayer stated that players will be tested upon arrival to camps and then three times a week. The technicalities of the fan presence are still being discussed.

NFL owners approved a proposal today to cover the seats closest to the field, then place sponsor logos over those seat coverings.

In addition, the NFL successfully completed their first virtual draft in late April with no technical issues. The virtual draft even included a Draft-A-Thon that raised more than $100 million for COVID-19 relief. Overall, the format created an authentic feel that might be replicated in future drafts.

The cancellations and postponements that are engulfing the sports world should encourage fans to continue taking precautions.

Parker Welch is a Junior at the University of Florida majoring in Sports Media at the College of Journalism & Communications.
@parkerrwelch
Previous WNBA concerns over redesigned Florida season
Next PGA Tour Getting Stricter with Protocols