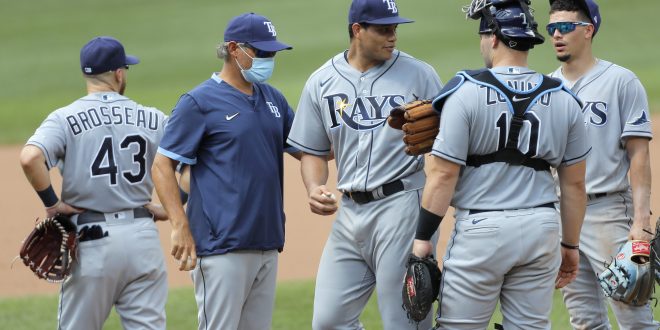 Tampa Bay Rays relief pitcher Yonny Chirinos, center, talks to teammates as manager Kevin Cash, second from left, pulls him out of the game during the fifth inning of a baseball game against the Baltimore Orioles, Sun, Aug. 2, 2020, in Baltimore. (AP Photo/Julio Cortez)

The Tampa Bay Rays are 4-6 thus far to start their 60-game season. The Rays started off the season hot but have since fallen into a five-game losing streak. Dave Wills, the voice of the Tampa Bay Rays, joined Sport Scene to talk matters over.

According to Wills, managers don’t seem to be changing their coaching style as much as you would think. Rays manager Kevin Cash has been maintaining similar routines regardless of the season and game changes.

“Kevin is staying patient with some of his players, and that should change this week,” Wills said. “You do the math, and everyone is saying that one game is worth about 2.75 games. We are probably past the one month mark. That’s usually when Kevin goes, ‘alright I gave you guys a shot to show me what you have, and what you can do.’ It’s time where I have to start managing where I might have to take the bat out of your hands.”

The Rays have been doing a great job keeping players healthy and maintaining coronavirus protocols. Since the beginning of camp, only six players have tested positive for the virus. Their most recent case pitcher Brendan McKay was able to rejoin the team last Friday after testing negative.

“The Rays are trying to follow the protocols in the best ways. From the very beginning, the Rays had a guy who oversaw all the protocols and that’s Mike Sandoval: one of our assistant athletic trainers,” Wills said.

Sandoval has taken the smallest details seriously. He maintains proper social distancing among players within plane aisles and bus seats. However, Wills explained that he is anxious to see how the tests run after the conclusion of their first road trips.

The Tampa Bay Rays will take on the Boston Red Sox on Tuesday and Wednesday. The Rays look to break their losing streak and potentially let new players take their shot on the field.

Parker Welch is a Junior at the University of Florida majoring in Sports Media at the College of Journalism & Communications.
@parkerrwelch
Previous Rookie CJ Henderson talks about Jags training camp
Next Tony Boselli Shares Coronavirus Experience