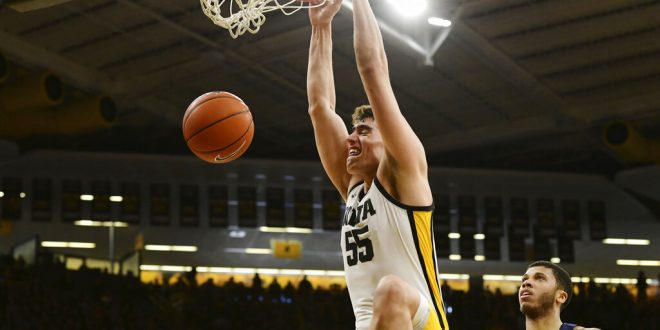 FILE - In this Feb. 29, 2020, file photo, Iowa's Luka Garza (55) dunks as Penn State's Myles Dread (2) looks on during the second half of an NCAA college basketball game in Iowa City, Iowa. Big Ten player of the year Garza says he is withdrawing from the NBA draft and will return to Iowa for his senior season. Garza says his heart is in Iowa City and that it would have been hard to close the book on his college career without a last chapter. (AP Photo/Cliff Jette, File)

Monday night was the deadline for underclassmen to withdraw from the NBA draft. Despite concerns regarding the 2020-21 college basketball season, 91 out of the 156 players opted to return to college. That’s the majority.

Big names return to school in lieu of NBA

Surprisingly, the 91 players returning to college have quite a few stars mixed in. These stars are sprinkled around some of college basketball’s most dangerous teams.

Naismith Player of the Year finalist Luka Garza announced his return to Iowa on Sunday. Garza is only the fifth Naismith finalist to return to school since 2005.

Additionally in the Big Ten, Ayo Dosunmu will return to Illinois. As a result, the conference will feature several national title contenders and a competitive schedule.

Then in the Pac-12, Arizona State gained an edge when Remy Martin withdrew from the draft. With all this talent returning to college, the 2021 draft looks tantalizing.

A handful of SEC schools were big winners on deadline day. Overall, LSU had the most productive day in the conference. The Tigers returned three players, most notably starting point guard Ja’vonte Smart.

Still, Smart was not the most exciting acquisition for LSU. That was Trendon Watford. The Tigers did not fully expect Watford to come back for his sophomore season.