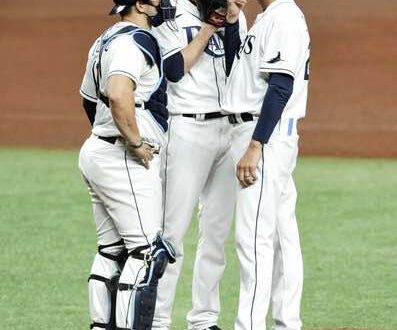 The Tampa Bay Rays dropped another game last night when they lost to the Boston Red Sox. Boston posted five runs, while the Rays went scoreless. This is the sixth loss in the past seven games for Tampa Bay. The young team started off strong this season but has been having trouble as of late. Next, they will host their A.L. East rival in the New York Yankees.

The Rays sent Ryan Yarbrough to the hill Wednesday night. Yarborough started off strong, but by the fourth inning, he ran into trouble. Centerfielder Alex Verudgo led the scoring for Boston with a two-run home run. The 28-year-old went through the fifth, allowing eight hits and five runs. His ERA jumped to 3.78. The bullpen held the Red Sox to five, only allowing two hits between them.

Aside from the lackluster pitching, the Rays bats were silent. And they have been quiet these past few games. Tampa Bay had a whopping total of four hits last night, compared to Boston’s ten. They faced Martin Perez, who also went five innings. The Rays did beat Boston the night before 5-1, but before that game, they had lost the past five. Hopefully, the return of slugger Austin Meadows from the injured list puts some pop in the Rays’ offense.

Another unusual thing for the Rays is Kevin Kiermaier’s performance in center. The three-time gold glover is known around the league for his ability to catch the impossible. From incredible dives and robbing home runs, he catches nearly anything hit at him. But this season, he has had a few slip-ups that seem out of character for him.

There is still plenty of hope for the young team. On Friday, they send 2018 Cy Young winner Blake Snell to the mound. Along with Snell, Tyler Glasnow will pitch in the series. The Rays have all the potential for run support in the offense.

It's been a tough start for the #Rays, but here are some things to consider, providing some perspective on the off day:https://t.co/XyZnfj0QhK

Tampa Bay will host the Yankees this weekend. While the game was set for Thursday night, it has been postponed. The two teams face off tomorrow night, and a doubleheader is set for Saturday. Snell is on the hill for the Rays, while Masahiro Tanaka suits up for the Yankees.