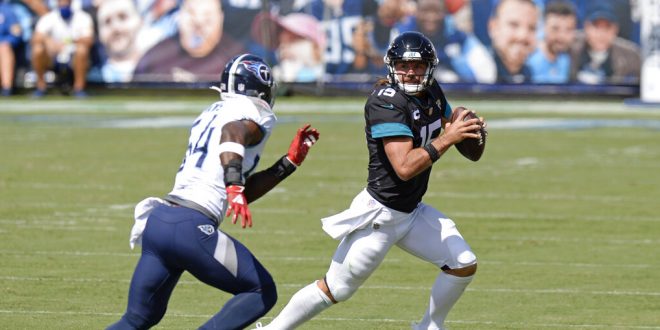 The Miami Dolphins and Jacksonville Jaguars face off tonight for a Week 3 Thursday Night Football.

The Dolphins and quarterback Ryan Fitzpatrick look to get their victory of the season. While quarterback Gardner Minshew II and the Jaguars seek to bounce back from close loss to the Tennessee Titans.

The Dolphins currently sit at 0-2 after two close losses against the New England Patriots and the Buffalo Bills. In the Week 1 matchup, the Dolphins fell short 11-21 against New England.

The Patriots got the victory after capitalizing on Miami errors and winning the turnover battle. Additionally, New England outran Miami with 217 rushing yards compared to the Dolphins’ final 87 yards.

In Week 2, the Bills were victorious 31-28 over Miami. Buffalo quarterback Josh Allen shined against the Dolphins defense. Furthermore, Allen finished the game with four touchdowns and 417 passing yards.

On the other hand, Fitzpatrick finished the game with two touchdowns and 328 yards against the Bills.

Jacksonville Looks to Bounce Back

The Jaguars are heading into this Thursday Night Football matchup 1-1.

In the season opener, the Jaguars defeated Philip Rivers and the Indianapolis Colts. After being termed “underdogs”, the Jaguars 27-20 victory proved the potential of the young Jacksonville team.

The Tennessee Titans came out on top with a 33-30 win against Jacksonville last Sunday. Furthermore, Titans’ quarterback Ryan Tannehill scored four touchdowns and 239 yards on 24 throws.

Despite the lost, Jacksonville’s running back James Robinson shined for the Jaguars offense. Additionally, Robinson recorded 102 yards on 16 carries and a touchdown.

The Jaguars host the Dolphins tonight at TIAA Bank Field. This Florida showdown kicks off at 8 p.m.