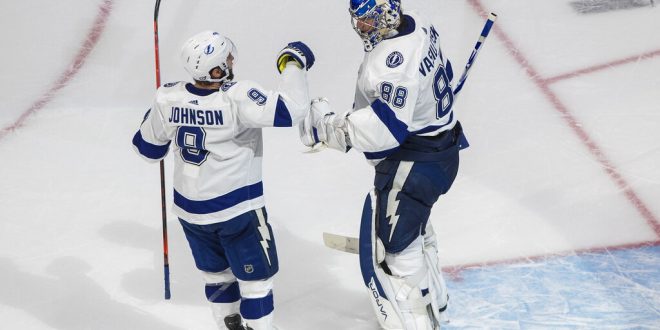 The Tampa Bay Lightning see the return of captain Steven Stamkos in a 5-2 victory over the Dallas Stars. Tampa Bay fell in Game 1 but have won two in row to take the 2-1 lead in the Stanley Cup Finals.

Dallas took a huge first game win and then kept it close in the second. This did not stop the Lightning from turning the tables in game three.

Tampa Bay started fast, taking their first shot around the minute mark and saw their first goal before six minutes had passed. The Stars’ defenseman Miro Heiskanen tried to changed direction on a Tampa Bay player. In the process, Heiskanen slipped and slid the puck right to Nikita Kucherov.

Kucherov won the one-on-one battle with the Stars’ keeper giving the Lightning a 1-0 lead early. Not two minutes later, Tampa went up 2-0 on Stamkos’s first goal since Feb. 20 against the Las Vegas Golden Knights.

The Stars gave themselves plenty of opportunities in the first period but fell short. Dallas’ right wing Denis Gurianov, about four minutes into the game, could have taken the lead on a break away.

Another missed opportunity for the Stars came when Jamie Benn stole the puck away behind the net and came around only to be blocked. The team as a whole out shot Tampa 18 to 7 in the first period.

Dallas mid-way through the first was able to bring the game within one goal. Dallas’ Roope Hintz battle for possession on the wall and was able to get it to Jason Dickinson in front of the net.

In the second period, the script flipped as the Lightning out shot the Stars 23 to four,  scoring three goals.

In less than a minute, Victor Hedman got the puck in front of the net, not covered by any Stars defender. The next two goals Tampa Bay scored half way through the period and towards the end.

The defense stepped up big time. Dallas saw just two good looks out of the four shots they took. Andrei Vasilevsky continues to perform at a high level saving unbelievable shots. He ended the night playing all 60 minutes with 22 saves.

Not much happened in the third. Both teams shot a total of 13 times and only one goal was scored. About seven minutes into the third, Stars’ Joe Pavelski passed the puck to Heiskane. Heiskanen’s shot was blocked but the puck landed behind Vasilsvsky and slid into the net.

Game 4 of the Finals

The Dallas Stars have fought in every series so far in the NHL Playoffs. They fell behind twice against the Flames and went to game seven against the Avalanche.

The Lighting lost the first game of the series against the Bruins and then won four straight games. It is unknown whether Stamkos will play again or if he will get more time on the ice. Game 4 of the Stanley Cup Finals is scheduled for Friday at 8 in Edmonton.