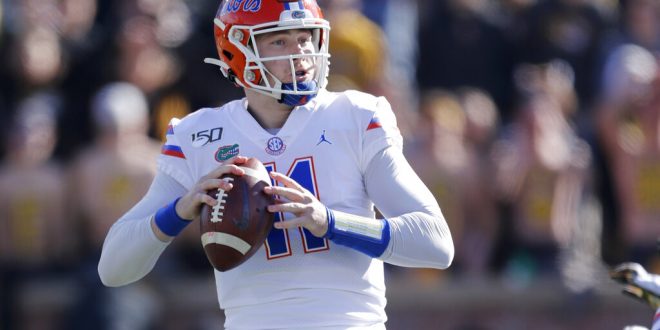 Florida quarterback Kyle Trask drops back to pass during the first half of an NCAA college football game against Missouri, Saturday, Nov. 16, 2019, in Columbia, Mo. (AP Photo/Jeff Roberson)

In his game against Ole Miss, Kyle Trask was historic. Now, he looks to build upon his success as the Gators prepare for their first home game of the year.

Trask said in a press conference on Monday that while the numbers were impressive, he still has things to work on.

However, Trask is still very happy with the team effort to start the season.

Saturday’s matchup against South Carolina will be Trask’s second game against them. In the game, Trask threw for 200 passing yards and four touchdown passes. The Gators won 38-27. The icing on the cake was three of those touchdown passes came in the fourth quarter, helping the Gators comeback from behind and pull away with the game.

Last season, South Carolina was ranked toward the bottom of the SEC in passing yards allowed with 235.3 per game. They were also ranked toward the bottom in passing touchdowns allowed per game with 1.9. While Trask was below average in regards to passing yards against the Gamecocks, he was well above average when comes to making the most of his passes, with twice as many touchdowns as the average.

In the game against Tennessee in week one, the Gamecocks’ defensive trends appear to be continuing from last season. The Gamecocks allowed 259 passing yards from Volunteers QB Jarrett Gaurantaro and a touchdown pass.

Now, Trask comes in having thrown 416 passing yards and six touchdowns. If the trends hold, he should be poised for yet another solid outing in Week two.

However, that is not necessarily Trask’s focus. In regards to his personal success, Trask said the only thing that matters is how the team does.

The Gators face the Gamecocks this Saturday at Ben Hill Griffin Stadium at Noon. The game will be covered on ESPN 98.1 FM/ 850 AM WRUF starting at 8 a.m.

Harrison is a sports coordinator at ESPN 98.1 FM/850 AM WRUF. He served as a beat writer for Florida Gators football for the 2019 and 2020 seasons. He also contributes to WRUF's Gainesville Sports Center segments and makes appearances on the Clash on Harp on Sports. Harrison has been a content writer for WRUF since January 2019 as well.
@HarrisonSmaj
Previous White Sox Enter First Postseason in a Decade Against The A’s
Next Yankees looking forward to Bieber and the Indians