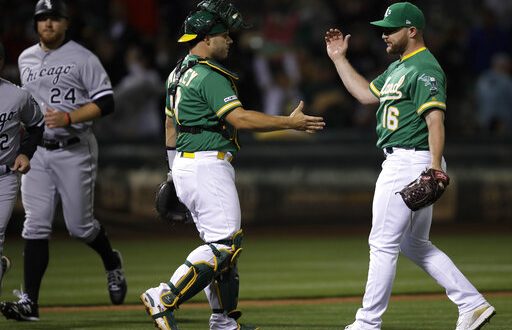 That’s how long it’s been since the Chicago White Sox lost to the Tampa Bay Rays during the ALDS in 2008.

For the first time in over a decade, the Chicago White Sox will be playing postseason baseball when they take on the Oakland A’s at 3 pm on Tuesday. RHP Lucas Giolito takes the mound for the White Sox while LHP Jesus Luzardo gets the bump for the A’s.

The Chicago White Sox had a winter to remember.

After signing All-Star catcher Yasmani Grandal and former Cy Young winner Dallas Kuechel, the White Sox showed they were committed to winning in 2020.  Excitement infected the South Side, and after the call-up of superstar prospect Luis Robert, the White Sox became a sneaky pick to make this newly extended postseason.

After posting a 35-25 regular-season record, the White Sox clinched a spot in the postseason.

Entering the last week of the season, Rick Renteria’s team was 33-17. After going 2-8 in their last 10 games, the White Sox finished second in the AL Central, one game back of the Minnesota Twins.

Oakland came firing out of the gates.

The A’s all-star infield, led by former MVP finalist Marcus Semien, carried them from the start playing stellar defense and getting on base. Additionally, led by Liam Hendricks, the A’s bolster one of the best bullpens in baseball.

Like all clubs, the A’s faced major adversity this year during the COVID-19 pandemic. However, with the wildfires that have devastated the West Coast, the A’s, in particular, had many obstacles to overcome en route to winning the AL West and clinching the second seed in the AL. Manager Bob Melvin discusses below.

The White Sox are led by two MVP candidates: Jose Abreu and Tim Anderson. Abreu has crushed baseballs this season, putting up a .317/.370/.987 slash line and leading the MLB with 60 RBI’s. Anderson, the 2019 MLB batting champion, continued his success from last season posting a .322 batting average.

Eloy Jiminez, who is dealing with a foot sprain, looks ready to go for game 1. Jiminez hit 14 Home Runs and added 41 RBI’s this season. He discusses his status below.

Giolito will need better command than 3.46 strikeouts per win, going against a lineup that has four batters getting on base over 32% percent of the time.

Lucas Giolito finished with 30 whiffs in tonight's no-hitter. The only pitcher with more in a no-hitter in the pitch tracking era (since 1988) was Nolan Ryan (31) pic.twitter.com/uLzzfKuq4P

The A’s are led by their stellar infield of Matt Olson, Marcus Semien and Matt Chapman. However, Chapman, the gold glove contending third baseman, had season-ending surgery before the postseason began. Jake Lamb will take over his spot at the hot corner.

If the A’s win this series the bullpen will be the story.

The A’s bolster arguably the best bullpen in the sport, led by All-Star Liam Hendricks. Hendricks posted a 1.78 ERA in 25.1 IP this season, one of four members of the A’s bullpen with a sub-two ERA. Yusmeiro Petit has been phenomenal for Oakland, posting a 1.66 ERA with a 1.108 WHIP, the best in the Athletics bullpen.

Jesus Luzardo takes the mound for the Athletics in Game 1. In 2020, Luzardo has a 3-2 record with a 4.12 ERA. In 2019, Luzardo started the AL Wild Card game, posting three scoreless innings and four strikeouts.

First pitch is at 3 pm on ESPN live from the Oakland-Almeida County Colosseum.

Get the schedule for the White Sox A’s series here.

Sam Petosa is a Journalism major pursuing a Specialization in Sports and Media at UF. The South Florida native produces daily shows for WRUF, including "Sport Scene with Steve Russell, and "The Tailgate." In addition, Sam provides weekly sports updates for WUFT News and radio Sportscenter's for WRUF radio. Sam has been a writer at ESPN Gainesville since January 2020.
@sampetosa5
Previous AL Wildcard Series: Tampa Bay Rays v. Toronto Blue Jays
Next Trask Looks to Improve and Pick Up Another Win