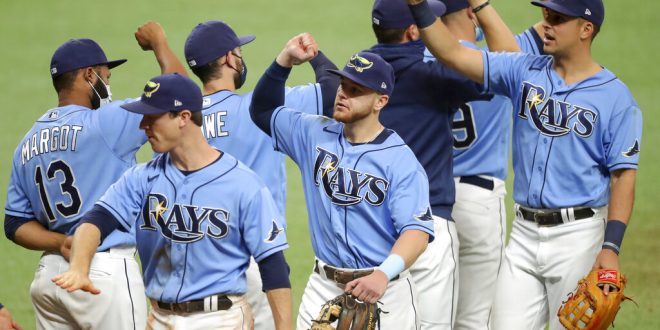 Members of the Tampa Bay Rays celebrate a 5-0 win over the Philadelphia Phillies in a baseball game Sunday, Sept. 27, 2020, in St. Petersburg, Fla. (AP Photo/Mike Carlson)

The top-seeded Tampa Bay Rays and the Toronto Blue Jays are set to face off in the American League Wildcard Series and will be the first time the two teams will meet in the post-season.

Fittingly enough, it will also be the first time the MLB will implement a neutral-site Fall playoff model in modern baseball history.

However, Rays veteran Kevin Kiermaier is finding solace in the consistency in the game. After all, its just baseball.

The three-game series begins tonight as the Rays will send lefthander Blake Snell to the mound while the eight seeded Blue Jays have sent some unexpected waves into the series by moving ace lefty Hyun Jin Ryu to Game 2.

The unexpected curveball from the Toronto bullpen is a part of the Blue Jays creative gameplan according to Manager Charlie Montoyo.

“In a three-game series, the goal is to win two of them. For us it makes sense to put our ace in the middle for several reasons,” he said.

The switch will allow the bullpen to be rested and ideally give the Blue Jays momentum if they were to win Game 2.

Toronto will start right-hander Matt Shoemaker in Game 1. Shoemaker has only started in one game since late August due to a shoulder injury. His last appearance was on Sept. 21 against the Yankees where he allowed three hits, one run through three innings. Tonight’s start will be his second game back from injury.

On the other side, the Rays have one of the most complete and deep bullpens in the Playoffs. Keiermair even gambled to say that their pitching staff is their biggest advantage.

Serving as the backbone of the team, also known as ” The Stable” the pitching staff has become the crown jewel of the bay area. Specifically for Snell, he has great success against the Blue Jays this season. With two starts against Toronto this season, he only allowed two runs over a little over seven frames.

On tap for the rest of the series,  RHP Tyler Glasnow will get the go in Game 2 and RHP Charlie Morton will close out the series in Game 3.

The bats are heating up for both teams, just in time for the Playoffs.

For the Blue Jays, no other hitter is seeing the ball better than third-basemen Vladimir Guerrero Jr. Guerrero, in one of the last series of the season against the Yankees had nine hits in the four-game series. He also recorded a home run in the final game of the regular season against the Orioles on Sunday.

Other Blue Jays to watch at the plate include lead-off man lefty Cavan Biggio and power hitter Teoscar Hernández who is fresh off an oblique injury and is still trying to find his groove. Another key for the Blue Jays success is gaining back first-baseman Rowdy Tellez.  Tellez, who is working his way back from a right-knee strain, has been added back to the roster and is expected to make his return to the lineup at some point during the playoffs.

As for the Rays, they could be potentially returning two of their best hitters from the injury list.

Outfielders Yandy Díaz and Ji-Man Choi are both recovering from hamstring strains and could be seen back in the lineup during the playoffs. The Rays have especially missed the absence of Diaz,  who led the teams’ on-base percentage.

The return of those two-hitters could be what makes the difference at the plate for the Rays. But, good news for the Rays is the consistent hot streak from second-baseman Joey Wendle. Wendle is riding an eight-game hitting streak and has notched a hit in 12 of the last 13 games.

Even though the two teams have not met in the post-season, that doesn’t mean they aren’t up to date on each other. In the ten matchups this season, Tampa Bay claimed six out of the 10 games. However, the Blue Jays put together more total runs at 48 to the Rays 44.

All the wildcard action for the Rays and Blue Jays begins this evening with first pitch at 5 p.m.