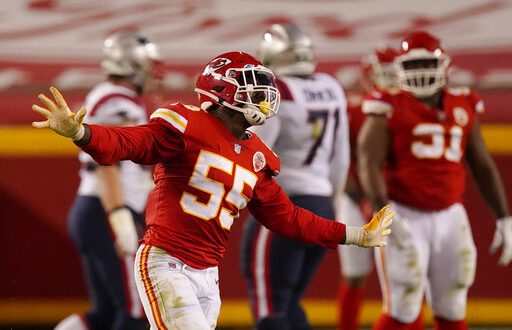 The New England Patriots were within striking distance of the Kansas City Chiefs heading into the fourth quarter of Monday night’s showdown.

Quarterback Jarrett Stidham, who replaced Brian Hoyer at the end of the third, threw his first career touchdown pass to N’Keal Harry with 13:45 remaining to cut New England’s deficit to just three points.

However, it was all Kansas City from that point on.

The Chiefs embarked on a nine-play, 75-yard drive on their next possession that ended in a six-yard touchdown pass from quarterback Patrick Mahomes to wide receiver Mecole Hardman. Kansas City celebrated another touchdown just nine seconds later, as safety Tyrann Mathieu found the end zone on a 25-yard interception return.

Kansas City’s 13-point barrage in the final quarter propelled the Chiefs to a 26-10 victory over the Patriots at Arrowhead Stadium in a game postponed by positive COVID-19 results from each team. With Monday night’s win, Kansas City became the first team in NFL history to start four consecutive seasons with a 4-0 record.

It’s still unknown whether Cam Newton will be cleared to play in Week 5. New England’s starting quarterback tested positive for the coronavirus on Friday, which forced the Patriots (2-2) to rely on Hoyer against the Chiefs.

Hoyer served as the primary backup to Newton in the first three games of the season. Stidham, meanwhile, was a healthy scratch for each of those contests.

Neither Hoyer nor Stidham did anything on Monday night to set themselves apart. The former went 15 of 24 for 130 yards and an interception. And although the latter threw a touchdown that narrowed Kansas City’s lead to 13-10 in the fourth quarter, he also threw two costly interceptions on 5-of-13 passing for 60 yards.

Coach Bill Belichick will have a tough decision to make as to who the starting quarterback will be for next week’s game if Newton remains out.

The opportunities were there for the Patriots to pull off an upset.

Mahomes, who came into the game with nine passing touchdowns and zero interceptions, almost gifted New England the ball in the opening drive when safety Devin McCourty let an overthrown pass fall right through his hands.

An early interception would have given the Patriots defense some much-needed confidence against one of the NFL’s most potent offenses. Instead, the Chiefs went on to score a 23-yard field goal in that same possession to take an early 3-0 lead.

In the closing seconds of the first half, Hoyer took an ill-advised sack in the red zone with no timeouts left. New England had no way of stopping the clock to bring out Nick Folk for a potential game-tying field goal and went into the locker room down 6-3.

The last straw came at the 4:01 mark of the third quarter when Kansas City defensive end Taco Charlton strip-sacked Hoyer to ruin another promising drive for the Patriots. The Chiefs turned Hoyer’s fumble into their first touchdown of the night, as Mahomes found wide receiver Tyreek Hill on a six-yard jet sweep to extend their lead to 13-3.

Belichick was well aware of his team’s mistakes after the game. He noted that the Patriots failed to capitalize on prime opportunities against the Chiefs.

When New England’s offense returned to the field, Hoyer was no longer under center.

The 34-year-old quarterback, who has now lost 11 straight starts for three different teams, was benched in favor of Stidham.

“It’s disappointing,” Hoyer said in his postgame press conference. “You never want to get taken out of a game. But coach made a decision, and I understand. Two bad decisions in the red area really cost us points.”