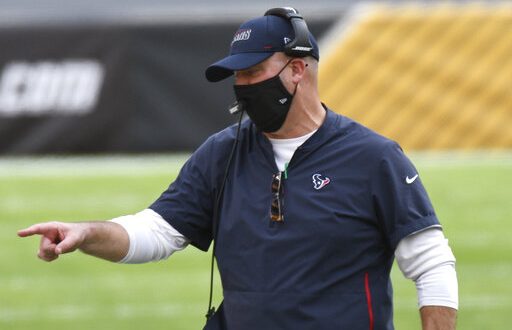 Houston Texans head coach Bill O'Brien talks to his players on the sideline during the second half of an NFL football game against the Pittsburgh Steelers, Sunday, Sept. 27, 2020, in Pittsburgh. (AP Photo/Don Wright)

The Houston Texans announced on Monday that they fired head coach and general manager, Bill O’Brien. The Texans fell to 0-4 on the season after a 31-23 loss to the Minnesota Vikings on Sunday. O’Brien held a 52-48 record as the Texans’ head coach.

Assistant head coach Romeo Crennel, who was previously Houston’s defensive coordinator, will take over as interim head coach. Crennel will also be the oldest head coach in NFL history at 73 years old.

A statement from Cal McNair. pic.twitter.com/5JbZylPTbp

“We just didn’t get it done”

Houston started the season facing three playoff teams from last season in its first four games. This included a matchup with Patrick Mahomes and the Kansas City Chiefs, the defending Super Bowl champion. The Texans lost all four games by a combined 46 points.

O’Brien coached the Texans to a 10-6 record last season and a win over the Buffalo Bills in the wild-card round of the playoffs. Their run came to an end in the divisional round when the Chiefs toppled them 51-38. That game was notable for the Texans blowing a 24-0 lead.

Prior to the 2020 season, the Texans had a winning record in six of O’Brien’s seven seasons with the team. This included four division titles. The Texans had made only two playoff appearances in 12 seasons before O’Brien’s arrival. However, Houston also went 2-4 in the playoffs during O’Brien’s tenure.

The Texans handed O’Brien the vacant general manager position in addition to his head coaching duties after the season. The Texans made headlines during the offseason for trading three-time All-Pro wide receiver DeAndre Hopkins to the Arizona Cardinals for running back David Johnson and a second-round pick in 2020.

Hopkins has a league-leading 39 catches for 397 yards and a touchdown this season for the 2-2 Cardinals. Meanwhile, Johnson is averaging under four yards a carry. The Texans also used that second-round pick to select defensive tackle Ross Blacklock, who has zero solo tackles this season.

Houston also does not own its first-round pick this year because of a trade the Texans made with the Miami Dolphins. The Texans sent two first-round picks and a second-round pick for left tackle Laremy Tunsil, wide receiver Kenny Stills and a fourth-round pick. O’Brien was the de facto general manager for the Texans in the deal.

Bill O’Brien is the first NFL head coach to be fired within the first four games of a season since Joe Philbin in 2015. pic.twitter.com/KXaxhYnQkm

Before coaching the Texans, O’Brien spent the 2011 season with the New England Patriots as their offensive coordinator. He was previously the team’s quarterbacks coach.

Following the 2011 season, O’Brien became Penn State’s new head coach after the Jerry Sandusky scandal and the termination of Joe Paterno. He went 15-9 in two seasons with the Nittany Lions despite dealing with NCAA sanctions stemming from the scandal. O’Brien was hired as the Houston Texans’ new head coach in 2014.