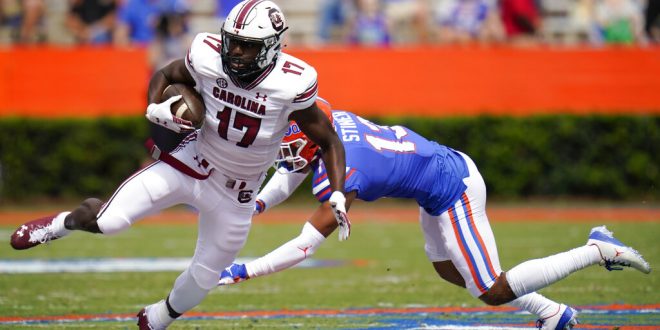 South Carolina wide receiver Xavier Legette (17) tries to get away from Florida defensive back Donovan Stiner, right, during the first half of an NCAA college football game, Saturday, Oct. 3, 2020, in Gainesville, Fla. (AP Photo/John Raoux, Pool)

The Gators football team jumped to 2-0 on Saturday after a 38-24 victory. However, after allowing 59 points and 942 total yards through two weeks, the defense is facing some criticism.

The defensive performance was a vast improvement from the Gators matchup with Ole Miss when the Rebels tallied 613 yards. There were still some uncharacteristic miscues in the game on Saturday, though, as the Gamecocks had 25 first downs to the Gators’ 18 and had nearly 13 more minutes of possession.

Defensive coordinator Todd Grantham still saw lots of improvement, especially from the first half to the second. In a video conference with reporters, he said he’s still remaining optimistic about his unit.

The Gamecocks averaged 3.96 yards per play, while the Gators averaged 6.57. However, Grantham mentioned that where the defensive unit really struggled was getting off the field. South Carolina made 5 of 6 fourth-down conversions, which hurt the Gators, especially in the fourth quarter.

While the Gators could chalk their defensive struggles up to the beginning of the season, Grantham’s unit has been missing some big playmakers.

Defensive tackle Kyree Campbell and defensive back Brad Stewart have been missing from the lineup in the first two weeks. Between the two of them, Campbell and Stewart have made 35 starts over the last two years. It is still unknown whether or not the two players will be available on Saturday at Texas A&M.

With the loss of six starters on defense last year, the Gators have seen a lot of newer players get snaps. In the case of junior Amari Burney, it means stepping into a new role. For most of the 2019 season, Burney played at the STAR position, but he now plays as a weak-side linebacker.

#Gators LB Amari Burney says he likes playing linebacker but he needs to step it up, noting the last two weeks "have been unacceptable for me, personally."

Says he's left plays on the field and needs to be more physical. He was extremely honest and open, props to him.

However, through two games at linebacker, Burney hasn’t been satisfied with his individual performance. His struggles have been indicative of a unit trying to match the team’s prowess on offense.

Grantham said Burney’s desire to improve is the right attitude to have.

The Gators travel to College Station to play a 1-1 Texas A&M team that just got dominated by Alabama in a 52-24 loss. The offense, led by Kyle Trask, will look to stay on their roll, while the defense hopes to get back to the hard-nose ball Grantham-led defenses are known for.

I'm a third-year student at the University of Florida passionate about storytelling and sportswriting. My goal is to work in communications for a professional sports team after I graduate.
Previous FHSAA Football Playoff schedule Announced
Next Rays-Yankees ALDS Battle Decided Tonight