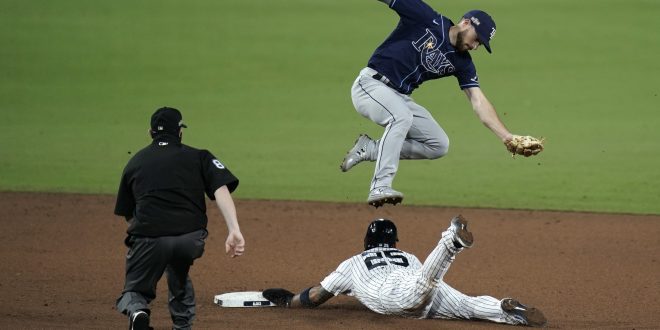 The scandalous Houston Astros will play in the American League Championship Series after defeating the Oakland A’s last night 11-6. This will make for the Astros fourth consecutive visit to the ALCS.

Tonight, a Game 5 tiebreaker with the Tampa Bay Rays and the New York Yankees will establish the Atros’ opponent.

For the 4th straight year, the @Astros are headed to the #ALCS. #CLINCHED pic.twitter.com/XL4rVgRu43

The Yankees-Rays ALDS Series lives on after the Rays lost in Game 4 yesterday 5-1. The back-and-forth series will make for an unpredictable Game 5. Following yesterday’s loss, Tampa Bay Rays pitcher Tyler Glasnow explained that he is ready to take the mound tonight as starting pitcher.

“I always say this, but I’m treating it like every other start. My preparation will be exactly the same. I’m feeling confident and ready to pitch,” Glasnow said.

Rays’ manager Kevin Cash explained that the team really needs to perform at the plate. The Yankees plan to start Gerrit Cole on the mound.

After playing four games together, the teams have had plenty of opportunities to familiarize themselves and adjust to each other’s play. Yankees Pitcher Garrit Cole explained that he is honored to be starting and feels that it will be a special game for everyone.

“Anytime you’re in the lineup in a do or die game, obviously, your teammates have faith in you. Your manager has faith in you. So, as a player its always a good feeling,” Cole said.

Astros in the ALCS

The Houston Astros secured their spot in the ALCS on Thursday after closing out their series against the Oakland A’s 3-1. Despite a losing record in the regular season (29-31), the Astros are entering their fourth consecutive ALCS. Houston is the first MLB team to make it this far with a losing regular season.

Astros being barley out of MLB’s biggest scandal, many are not too happy with their success this season. Within Game 4 of their series, Pitcher Zack Grienke supposedly signaled his pitch to A’s Outfielder Ramon Laureano by holding up two fingers.

The Astros will either face the Yankees or the Rays in Game 1 of the ALCS on Sunday, Oct. 11.

Parker Welch is a Junior at the University of Florida majoring in Sports Media at the College of Journalism & Communications.
@parkerrwelch
Previous Gators Defense Looks to Build On Week 2 Improvement
Next Florida at Texas A&M Preview