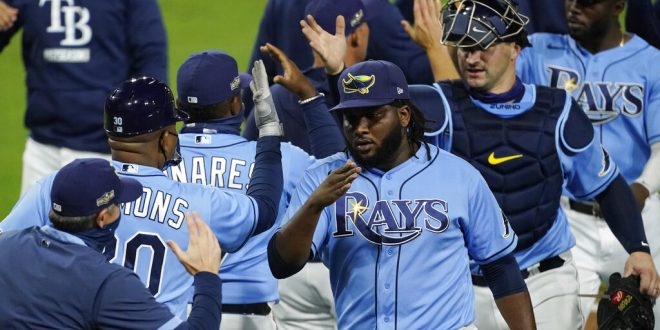 The MLB Playoffs continues today with two conference series matchups.The ALCS showcases the Tampa Bay Rays and the Houston Astros squaring off in Game 2. The Rays currently lead the series 1-0.

The NLCS kicks off today between the Los Angeles Dodgers and the Atlanta Braves.

After winning Game 1 of their conference series matchup 2-1, the Rays look to take a commanding two-game lead over the Astros.

Rays catcher Mike Zunino said there were a few times during Game 1 when they could’ve “gotten derailed but the pitching staff and defense picked us up.” The Rays, through the postseason, have only made three errors in 286 total chances. The Rays pitching had a top-three team ERA in the regular season.

The former Florida Gator also attributed the win to pitcher Blake Snell. Zunino stated “Snell ran his pitch count up and gave us a chance.”

The Rays will look for today’s pitcher, Charlie Morton, to also take up a lot of pitches and not make the relievers have to pitch a lot. In his only game this postseason, Morton gave up just one earned run in five innings pitched.

Astros slowed at the plate

The Astros, scoring three or more runs in every game this postseason, scored only one run against the Rays in Game 1. Astros’ third baseman Alex Bregman, however, thought their at-bats were very good.

Bregman said they “just didn’t get that one big hit, but I was extremely happy with our team’s at-bats.” Bregman thinks that if they can get one or two big hits, they can win.

On the mound in today’s game is Lance McCullers Jr. for the Astros and Charlie Morton for the Rays.

Pitching is key to a win

Tonight’s conference series game will be a battle between the two teams with the best ERAs in the postseason. The Braves, as a team, have an ERA of 0.92 to the Dodgers 2.00. Both teams, however, will be starting pitchers with an ERA higher than 3.00.

Pitching for the Braves will be fourth-year pitcher, Max Fried. Fried has had the best statistical season of his career with a 2.25 ERA in 11 games during the shortened regular season. Fried said that in the past few years, he has been “trying to do too much or make the perfect pitch” which has resulted in him not being as great as he could be. This year, however, Fried has “tried to do a better job of executing my pitches and really just putting them in better spots.”

Braves manager Brian Snitker said he has “every confidence in the world that [Fried] will go out and have a really good game.”

Dodgers are confident in their talent to get a win tonight

Buehler also commented on the Braves young hitters saying “they’ve got a lot of veteran hitters over there and younger guys that play like veterans.”

The Dodgers manager, Dave Roberts, thinks that the three days of rest the team has had will be very helpful getting a win tonight. Roberts said his players “are the freshest they’ve been all season.”

Furthermore, Roberts will look to get a win tonight to set them up well for the shortened series in which they will play every day.

Both teams will hope that their batting can get them a win tonight. The Dodgers and Braves tied for the highest slugging percentage during the regular season. The Braves had the second-highest batting average with a 0.268.

Jensen Young is a journalism student at the University of Florida. He works as a sports writer for WRUF.com and is the voice of trendings on Wednesday mornings on the WRUF radio station.
@Jensen_Young9
Previous Jaguars Hand Texans Their First Win
Next ‘We’ll Be Back’: Heat Vow to Return to NBA Finals After Loss