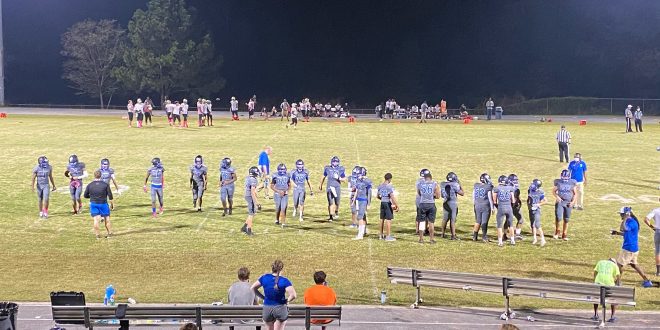 The Wolves stretching before the second half.

It has been a rough season for the Wolves who entered this game 0-6. However, their development as a team has been evident from week-to-week, especially on the offensive side of the ball.

St. Francis hosted a conference matchup against Halifax Academy on Thursday Night. Despite the Wolves’ improving performance, the Knights pulled away at the end to defeat them 58-48.

An Explosive First Half

The first half was a fierce shootout. After a slower first quarter, Halifax led only 8-0. Yet, a better matchup was in store for the fans as both teams caught fire and started to exchange touchdowns left and right.

The duo of senior quarterback Riley Brown and junior Omarion Littles has been building a connection over the course of the season. Last night, they were absolutely electric. The two dominated offensively for the Wolves as they connected for three touchdowns and led to an unbelievable 32 point second quarter.

Early in the second, St. Francis got on the board with Littles’ first touchdown when he caught a short slant route from within the red zone and danced past 3 defenders. Littles remained productive, reeling in a dime from Brown in stride for a total of 60 yards and another set of six points.

Halifax seemed to have a similar connection as St. Francis’ Brown and Littles. Junior quarterback Jarrett Reddin and senior D’Vonte Lindsey elevated the team to keep pace with the Wolves. The pair linked for two touchdowns in the quarter for the Knights.

Once again, Littles wreaked havoc on Halifax when he sped past all defenders to return a 70-yard kickoff to the house. The Knights showed no answer for the destructive wide receiver who totaled four touchdowns in the first half.

As halftime approached, St. Francis junior Jacomiah Walker caught a safety-valve pass from Brown and ran it 56 yards for a touchdown on the final play. This score put the Wolves just barely ahead of Halifax, 32-30.

During the intermission, players, coaches, and fans were reminded of the dangers of playing sports. Unfortunately, a Halifax player was carted off the field into an ambulance.

A Chippy Second Half

The second half was extremely sloppy for both teams. Several fumbles, interceptions, and penalties highlighted a chaotic 24 minutes of football. In addition, many players were injured and feeling cramps after extended halftime, so it felt like every other minute the trainer was on the field.

However, the Wolves found a way to pick up where they left off, as a solid drive to start the third quarter ended with Walker dashing past defenders into the endzone. St. Francis now led 40-30.

Needing to catch back up, the Knights scored three quick touchdowns to pull ahead of the Wolves at the end of the 3rd quarter, 52-40. These consisted of a Reddin rushing touchdown and a 60-yard run from Lindsey that set up Halifax in the red zone for another score.

The Halifax defense cranked things up a notch in the later parts of the game allowing their offense to take and stretch a lead. They secured four interceptions in the second half, two of which set up touchdowns.

Throughout the fourth quarter, tensions flared up and teams got aggressive towards each other. Coaches emphasized just playing football to their players and not making things personal. The teams got back to business and focused on finishing up the game.

On a late comeback effort, Trevor Spencer broke away from the Knight’s defense and ran for a touchdown. The two-point conversion was successful, but with only one minute left, it was not going to be enough for the Wolves as they fell 58-48 to Halifax Academy.

On the road next week, St. Francis will face Trinity Christian Academy at 7:00 p.m. in their third conference matchup of the season.