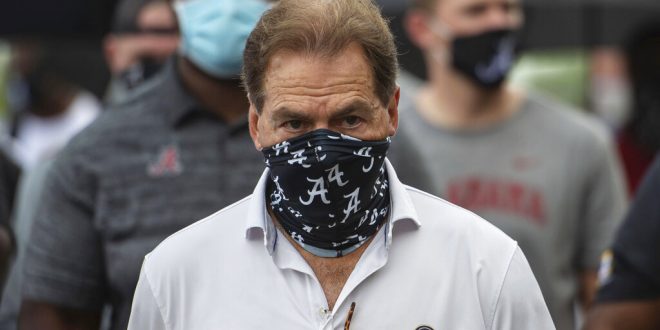 FILE - In this Aug. 31, 2020, file photo, Alabama head football coach Nick Saban leads his team as they march on campus, supporting the Black Lives Matter movement, in Tuscaloosa, Ala. The mid-week news that Alabama coach Nick Saban tested positive for COVID-19 added a challenging backdrop for the season’s first Top 5 matchup. Saban figures to be communicating his marching orders and input from home while offensive coordinator Steve Sarkisian is manning the show within the football building. (AP Photo/Vasha Hunt, File)

After five games on Saturday, here is a roundup of the upsets and dominant wins that defined Week 4 in the Southeastern Conference.

No.3 Georgia at No.2 Alabama

In what was the marquis matchup of the weekend throughout college football, the Crimson Tide emerged with the 41-24 victory.

Much like the rest of 2020, this game had an unusual set of circumstances. For one, Alabama head coach Nick Saban almost did not coach due to a positive COVID-19 test during the week. However, as a result of three consecutive days with a negative test (including Saturday), Saban defeated his former assistant, Kirby Smart. With the win, Saban extended his perfect record against his former assistants to 22-0.

The game itself was a bizarre, albeit entertaining, game. On the first play of the game, Alabama quarterback Mac Jones threw an interception. Three plays later, Georgia quarterback Stetson Bennett threw an interception. Three plays after that, Jones threw a 40-yard touchdown pass to John Metchie III. Despite the calamity of the opening minutes, it was Georgia that held a 24-20 lead over Saban and the Tide. However, the Jones-led Crimson Tide outscored Georgia 21-0 in the second half, including a touchdown pass to roundup the game with ten minutes to go.

Looking ahead, the Crimson Tide (4-0) have another tough test when they travel to Knoxville to play Tennessee. The Georgia Bulldogs (3-1) have a bye week to lick their wounds before heading to Lexington to play Kentucky.

Two teams that are in a rebuild hashed out a high scoring affair in Fayetteville. Both the Rebels and the Razorbacks came into the contest at 1-2, but Ole Miss did themselves in on Saturday.

The Razorbacks were able to roundup seven turnovers, highlighted by quarterback Matt Corral’s six interceptions, led to 24 points for Arkansas. The Razorback defense returned two of Corral’s interceptions for touchdowns. The high-octane offensive style of Lane Kiffin clearly backfired on Saturday with the Rebels unable to hold onto the ball. Suddenly Arkansas, a team which won one SEC game in the previous three years combined, has two conference wins. Interestingly, both those wins came against teams from the state of Mississippi.

For Ole Miss, they face a motivated Auburn side this upcoming Saturday and Arkansas has a week off to prepare for their trip to Kyle Field to face No. 7 Texas A&M.

No. 11 Texas A&M at Mississippi State

In a game that was never in any real, dangerous doubt, Texas A&M continued to show why they are a top ten team. Although Kellen Mond and Isaiah Spiller did not follow up on their performances against Florida from Week 3, it was enough to beat the Bulldogs by a score of 28-14. Since their loss to Alabama, Texas A&M has shown strength on both sides of the ball. On defense, they gave up 219 yards passing and actually held Mississippi State to -2 rushing yards for the game. The offense for the Aggies flexed their muscles against Florida, and receded slightly against Mississippi State. However, the core is there for Texas A&M to turn some heads as the season progresses.

Jimbo Fisher and the Aggies face Arkansas after a week off, while Mississippi State will look to roundup their three-game losing skid in two weeks when they face Alabama.

Roundup for the major upsets of the week

Perhaps Tennessee was reeling after a tough loss against Georgia in Week 3. It may have been that complacency that cost the Volunteers another loss, this time by 27 to an unranked Kentucky side. Despite a dominant 34-7 win, Kentucky’s offense was nothing to flaunt. Instead, it was the defense that stepped up for head coach Mark Stoops. Pick-sixes on back-to-back drives for the Wildcats shot Kentucky out to a 14-0 lead in the second quarter, and they would never look back.

What was maybe the most unexpected result of Saturday, Kentucky had not beaten Tennessee in Knoxville since 1984.  Stoops says his current team does not carry the burden of Kentucky’s past, and his proud of the foundation his team is laying for the future.

Kentucky looks to build on this win next week at Missouri. Tennessee, which has lost two in a row, will host No. 2 Alabama this upcoming Saturday.

Elsewhere, South Carolina pulled off the upset against then-No. 15 Auburn, 30-22. A popular upset pick, South Carolina may have been out gained on offense, but the Gamecocks forced three turnovers to offset the Tigers’ gains. Yet again, Bo Nix was inconsistent throwing the ball, yielding three interceptions to go along with only one touchdown. Both teams now sit at 2-2 on the season, with road games against unranked opponents next week for both.

Originally from Seminole in the Tampa Bay area, Kyle is a contributor for ESPN Gainesville as well as local NPR and PBS affiliate WUFT. Kyle wants to get into sports with a lofty dream of being a sports broadcaster. He was raised playing soccer and baseball while watching hockey and football, so the knowledge about various sports is fairly extensive.
@KyleFanslerUF
Previous Dodgers Beat the Braves to Advance to the World Series
Next The Arizona Cardinals take on the Dallas Cowboys in Monday Night Footbal