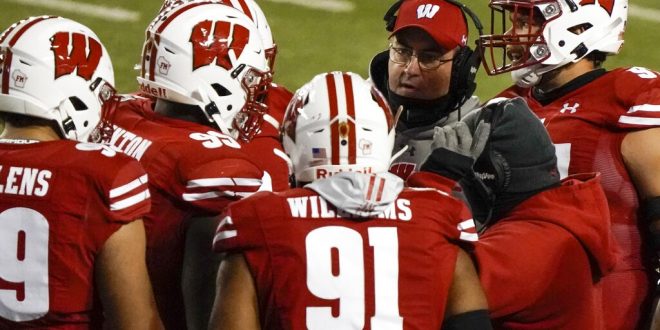 Wisconsin head coach Paul Chryst talks to his players during the first half of an NCAA college football game against Illinois Friday, Oct. 23, 2020, in Madison, Wis. (AP Photo/Morry Gash)

The Wisconsin football program is taking a pause after 12 people tested positive for COVID-19 ahead of their matchup against Nebraska.

The Badgers were fresh off of a 45-7 win over Illinois last week. Nebraska, on the other hand, lost 52-17 to a highly-ranked Ohio State team last week. The lack of a game this week will not count against either team’s records.

Big Ten policy states that any player who tests positive must sit out of action for 21 days. In addition, coaches and other team personnel only have to quarantine for 10 days. Of the 12 currently positive for COVID-19, six are staff members and six are players, according to reporting from the Wisconsin State-Journal.

Among those who tested positive for COVID-19 was Wisconsin’s head coach Paul Chryst. On Wednesday, he spoke to the media about the disappointment he felt not being able to play Nebraska this week.

Chryst, who took over the program in 2014, has a record of 52-16 in his career as a Badger. Furthermore, he wants the team to play, but at the same time, he knows there’s a balance of health and sport that his team needs to find. He spoke to the media on Wednesday about how the team is finding that balance.

The state of Wisconsin is a COVID-19 hotspot as of late-October. Furthermore, the state has had over 222,000 cases of COVID-19, and the daily increases in cases is back up to around 4,000 new cases per day.

Chryst spoke to the media on Wednesday about the state being a COVID-19 hotspot, and what that meant for his team going forward.

Wisconsin and Nebraska are not the only teams to miss games because of COVID-19 outbreaks. The Florida Gators, who take on Missouri on Saturday, have missed their last two weeks because of an outbreak on the team. Florida’s game against LSU has been rescheduled to December.

Steven Walker is a beat writer for ESPN Gainesville and is currently studying Journalism & Sports Media at the University of Florida.
@swalker_7
Previous Falcons and Panthers Battle in TNF
Next Gator legend Jack Youngblood is next Mr. Two Bits