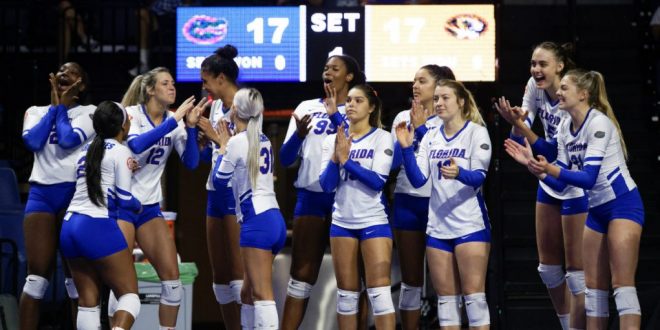 The Florida Gator volleyball team swept Alabama not only on Friday night but also came out with the dub on Saturday afternoon to close out the series with the Crimson Tide and wrap up their home season opener on a high note.

The fourth ranked Gators remain undefeated with a 4-0 record.

Brought the block party to the @OConnellCTR & got the DUB 😤#GoGators pic.twitter.com/iPzeRHWlae

After winning in three straight sets Friday night, Alabama came out in Set 1 of Saturday’s game against Florida much stronger.  However, Florida ended up taking the first set (25-21) and continued to dominate for the rest of match.  The Gators took control of the remaining two sets shutting Alabama down by scores of 25-17 and 25-22.

Florida’s offense looks hot this season and the Gators stifled Alabama’s offensive game overall, holding the Tide to a .095 clip on the afternoon.

Sophomore T’ara Ceasar had a dominant performance Saturday. She led the Gators with 15 kills and a .344 clip on the afternoon. Seven of Ceasar’s 15 kills happened in the first set.
She continues to be a leading scorer for the Gators with 17.5 points. She is a transfer from the University of Georgia and has greatly made an impact on the Florida roster this season so far.

Ceasar says her transfer has been a comfortable transition because of her teammates.

“My teammates have been so helpful in making me feel so comfortable and not nervous. I know the very first game we played in Auburn, I was nervous but they really helped me get out of that,” she said.

Thayer Hall wasn’t far behind in leading kills racking up 11 and Marlie Monserez also shined for the Gators with 28 assists, eight digs and two blocks.

Florida recorded the most blocks in its season in Saturday’s game recording 19.5 blocks. This is the highest total in a three-set match in program history.

Lauren Dooly led the way with 10.0 blocks, just two shy of her career-best. Marlie Monserez and Nnedi Okammor each posted a career-high nine blocks in the match as well.

Paula Cerame led the Gator’s defense in the backcourt, posting a season-high 12 digs.

Florida is already half way through its 2020 season. Next week the Gators have a bye week but will continue their regular season on the road the following week. Florida will take on the South Carolina Gamecocks Wednesday November 11 and Thursday November 12.