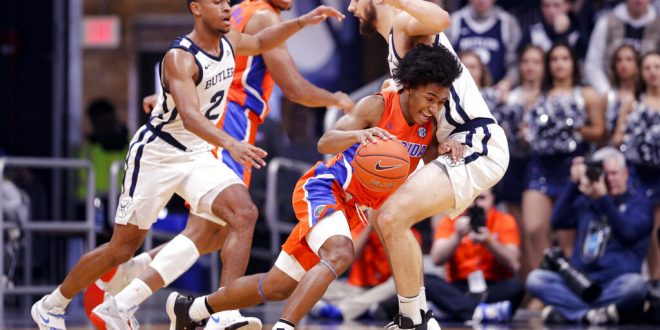 FILE - In this Dec. 7, 2019, file photo, Florida guard Ques Glover (0) drives around Butler forward Bryce Golden (33) in the first half of an NCAA college basketball game in Indianapolis. Florida ranked 326th out of 359 teams nationally in pace of play. Coach Mike White is eager for his Gators to run and press like never before. (AP Photo/Michael Conroy, File)

When Andrew Nembhard announced his decision to transfer to Gonzaga, it left the Gators with a major gap to fill at point guard. After all, Nembhard led the Gators averaging 33.2 minutes per game and played in all of their games in 2019. Sophomore guard Tre Mann entered the 2021 NBA Draft but elected to stay. Now, coach Mike White and the Gators will have to choose from three players at point guard.

Cleveland State transfer Tyree Appleby, sophomore Ques Glover and Mann make up a point guard room that could get very interesting as the season approaches. Glover said he’s excited for his opportunity and he’s been working hard to prepare for it.

Glover and Mann both played partial minutes last season, while Appleby sat out as a transfer under NCAA rules. During that time, Glover and Mann averaged 4.4 and 5.3 points per game respectively. The decision on who gets the start for the season opener could hinge on the offensive system, as well.

Last season, White’s team relied heavily on Nembhard and Virginia Tech transfer Kerry Blackshear Jr. That offense kept a very slow offensive tempo, much to the dismay and agony of Florida fans. Glover said he anticipates the offense will move quicker with opportunities for more players.

Of course, in his first season wearing the orange and blue, Glover established his brand as a very quick and agile player. He said, though, that can be a blessing and a curse. Glover ranked fourth on the team averaging 1.3 turnovers per game with the only three ahead of him being consistent starters.

He said he’s looking forward to a more up-tempo team but wants to make sure he’s individually making the right play.

Glover mentioned that his main goal for the season is making sure that he doesn’t commit as many turnovers as assists.

With the offensive style Mike White and the Gators are pursuing, their team will have to be deep. Glover mentioned that quicker play will require more consistent substitutions and more opportunities for minutes off the bench.

When asked about his thoughts on the position battle, White said all three have had great practices:

I'm a third-year student at the University of Florida passionate about storytelling and sportswriting. My goal is to work in communications for a professional sports team after I graduate.
Previous Green Bay Packers and San Francisco 49ers Preview
Next Omar Payne looks to fill gap at center for Florida