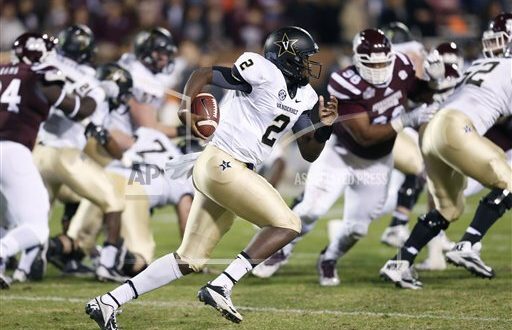 The 0-4 Vanderbilt Commodores will travel to Starkville on Saturday in search of their first win over the 1-4 Mississippi State Bulldogs since 2004. The last time these two teams met ended in a decisive 51-0 victory for Mississippi State. Both teams enter the matchup in last place in their respective SEC divisions. After upsetting LSU on the road in their season opener, the Bulldogs have dropped their last four games. Meanwhile, Vanderbilt’s only narrow loss came in its season opener versus Texas A&M when the Commodores managed to keep it a one-score game. Mississippi State’s average point differential this season is -14.8, while Vanderbilt is being outscored by 31 points per game.

Since its season opener, Mississippi State has managed to score just 30 points over four games. Much of the Bulldogs’ offensive struggles can be attributed to the recent performance by senior quarterback K.J. Costello. Costello has thrown one touchdown pass and eight interceptions since his outlying first game in which he passed for 600 yards and five touchdowns. Although Costello has taken much of the offense’s blame, Mississippi State’s wide receivers surely haven’t helped either.

In the second quarter last week versus Alabama, Costello left the game with a head injury. True freshman Will Rogers filled in for Costello, completing nearly 65% of his passes for 147 yards while throwing two picks. For now, it remains unclear as to who will get the start at quarterback on Saturday.

Mike Leach had no update on KJ Costello and hasn't yet announced Will Rogers the starter.

But the limited QBs has given the coach a chance to balance the snaps in practice. https://t.co/url2pFmwao pic.twitter.com/DL5cLV2FdG

Rogers isn’t the only player on Mississippi State’s roster who lacks experience. Leach admitted the Bulldogs’ overall level of experience is an issue. “We don’t have too many guys who have played too many snaps,” Leach said.

Vanderbilt’s enter this week’s contest coming off a 33-point home loss to Ole Miss. The Commodores are one of only 10 teams in the nation currently allowing north of 500 yards per game. In spite of this ugly statistic, Vanderbilt head coach Derek Mason says the defense is “getting its footing.” Offensively, the team “continues to advance,” Mason noted.

The Commodores found the end zone multiple times last week for the first time this season. Freshman quarterback Ken Seals completed over 75% of his passes while hurling for 319 yards and two touchdowns.

Seals and company will look to carry their momentum into Saturday’s game against a unique Mississippi State defense. Mason called the Bulldogs’ defense “different in terms of what they do with the multiplicity of looks you get,” Mason said.

Following Saturday’s game, Mississippi State will face a grueling next two weeks. The Bulldogs will first prepare for No. 24 Auburn before going to Athens for an away game versus No. 5 Georgia. As for Vanderbilt, the Commodores will close the season with a tough remaining schedule that includes three road games and two ranked opponents (No. 8 Florida and No. 5 Georgia).

Hello, I am currently a junior at UF studying sports media journalism with a concentration in Political Science. I contribute web and radio content weekly for WRUF ESPN Gainesville. Be sure to check out some of my recent articles!
Previous Buchholz will take on Santa Fe
Next Tennessee Looks To Break Losing Streak At Arkansas