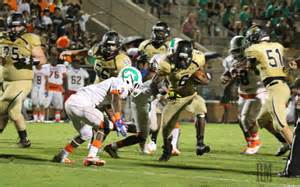 Buchholz will take on Santa Fe

The Buchholz Bobcats (5-1) will host the Santa Fe Raiders (2-4) on Thursday night at 7 p.m. at Citizens field as they look to advance to 6-1. The Raiders lost their last matchup 20–3 against the Eastside Rams, setting their record to 2-4. Last season the Bobcats defeated the Raiders 17-7. The Raiders will look to redeem themselves for their loss last season.

The Bobcats are coming off a 54-27 win against the Creekside Knights last Friday. This season the Bobcats have only lost one game, which was their first game of the season to the Oakleaf Knights. Buchholz will look to beat the Raiders tonight as they try to build up momentum going into the playoffs next week.

Bobcats should look to use their running back Quandarius Smith. Smith had a 71-yard rushing touchdown last week in their win against the Knights.

Check out my highlight – https://t.co/TL5DCPWMDn

The Bobcats should also look to use their quarterback, Creed Whittemore. Whittemore had a big against Creekside last week as he threw for two touchdowns and rushed for a touchdown.

Bobcats head coach Mark Whittemore speaks on his matchup against the Raiders:

The Raiders are looking to redeem themselves after losing to the Eastside Rams last week. This season hasn’t been the best for the Raiders as they are 2-4 this season. A win against the Bobcats should build confidence for their team as they look forward to their playoff matchup.

Quarterback Landon Rogers has thrown for 955 yards this season and has a quarterback rating of 94.1%. The Raiders should look to use their quarterback to find his targets early to build an early lead if they plan to gain a win against the Bobcats. Rogers has also thrown for six touchdowns and completed 79 of his passes to his receivers averaging 187 passing yards per game.

#2 in class 4A passing yards through week 4.https://t.co/FTrvhyOHHJ

Raiders head coach Jared Allen speaks on his matchup against the Bobcats: