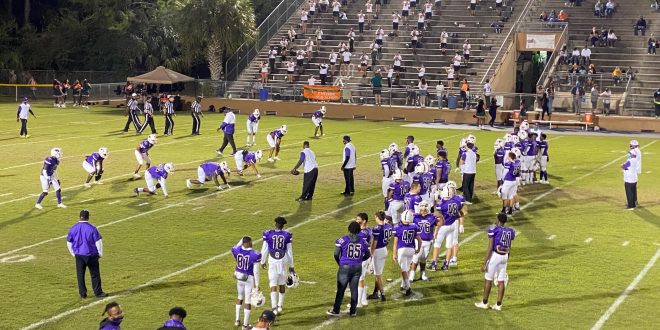 The Hurricanes prepare for their first home game in weeks against the Eastside Rams. (Image from Kaitlyn Wadulack)

The Gainesville High School Hurricanes have suffered the effects of COVID-19 more than most high schools. This team was put through not just one, but two quarantines. As a result, Gainesville only had five regular-season games, and their playoff journey is just now beginning. Most teams wouldn’t be in the playoffs with a 2-3 record, but anything is possible in this historic 2020 season.

We all are living in a world revolving around COVID-19. Every rule, guideline, and mandate has changed our perspective on multiple aspects of society, especially with sports. We see the NFL still playing regular games every Monday, Thursday, and Sunday just with empty stadiums and mask protocols. We see the effect COVID-19 has had on the University of Florida’s football program with multiple players testing positive, forcing two games to be postponed. But what about high school sports?

High school athletes are the future college and professional stars. These athletes need to play games, need an audience to see them play, and need to be noticed. With the threat of COVID-19 looming, it’s hard to get the repetition, the attention, and the training to accomplish those tasks. No team better understands this frustration than the Gainesville Hurricanes. Their football program has completed two quarantine periods where there was no practice, no games, and no in-person contact due to exposure to the virus. Now, a few weeks after their second quarantine ended, the Hurricanes are fighting hard to survive the rest of this season.

The Hurricanes began their season playing the Santa Fe Raiders, winning 14-0. They suffered two consecutive losses against Seminole and Trinity Catholic. After their loss to the Celtics on September 24th, the Hurricanes endured their first COVID-19 exposure, leading the entire football program to be under quarantine.

“We had a potential exposure come from outside of our football team, and that exposure turned into a positive test, which led to our first quarantine. So, we had to shut everything down…No football activities other than zoom meetings,” said Head Coach Dock Pollard

Due to health precautions, the home JV Football (Tuesday) and the away Varsity Football game (Friday) have been cancelled.

The Hurricanes canceled two of their games. No in-person practices, no weight training, no anything as a team in-person. Zoom was the only way for this team to connect. Everyone has their opinions of “Zoom University,” but imagine running a sports program through Zoom. It’s hard enough to gain people’s attention through an online portal for a mathematics class, but a football practice? Nevertheless, Pollard persevered and gave his team the best he could given the circumstances. In fact, Zoom gave his players a real-life experience with how working in the pros could be one day.

“We watch film and we try to simulate [the fundamentals]. When we were in quarantine, we tried to simulate those things, make game-type situations through Zoom meetings…I think the real motivation was to actually get them on the Zoom because…it’s more like a classroom setting, which if any of them have any plans on going to the next level, they have to learn that anyway. It’s not just drawing plays up in the dirt…It’s a science, especially in today’s world of big business in college football,” said Pollard.

After the first quarantine, the Hurricanes planned to play their first game back against the Buchholz Bobcats in mid-October. The team got in two practices, but bad news struck mid-week. A second football player tested positive for COVID-19 while outside of the football program, and the quarantine cycle began for the Hurricanes once again.

“We probably only practiced seven times the whole [month of] October. If you are going to be good at anything, you have to master your skills and you master your skills by getting as many reps as you possibly can get. We take that into account, two quarantines into account, along with no Spring Ball, we didn’t have a real summer because of [COVID-19], and we’ve got a transitioning staff with new ideas, new perspectives, and just a brand-new direction. We have just been trying to survive…and put as much as we can into the small window of time that we’ve had. It’s been frustrating to say the least,” said Pollard.

All About the Team

Any team needs motivation and drive to be successful. That’s something this program doesn’t lack. The Hurricane athletes still had the motivation to finish out their 2020 season even after two quarantines. What the team suffered from most was frustration from missing the game.

“[The team was] just anxious to get back on the field. They’ve missed it more than anything. It’s the game that they love,” said Pollard. “I’m pretty able to adapt to anything, but that’s not always the case with everybody else and their frustration frustrates me because we do want what’s best for our student-athletes. We just haven’t had a real opportunity to really put it together.”

Luckily, the team was released from their second quarantine towards the end of October, just in time for a game against the Lee Generals. Although it was a loss, the coaches, staff, and players were just happy to be on the field again, playing the game they are passionate about.

Fortunately for the Hurricanes, practice does make perfect. In their most recent matchup against the Eastside Rams, the Hurricanes applied what they went over in their Zoom meetings and defeated their rival.

“We’ve gotten the opportunity to play and practice the last two or three weeks now,” said Pollard. “I like to see the things that we have worked on in practice now that we are actually back on the field. I want to see those things translate from the practice field to game situations.”

What the Future Holds

The threat of COVID-19 isn’t gone just yet, but the Hurricanes are looking forward to finishing this season out. All safety measures are being taken seriously to ensure this football program stays on its feet. The Hurricanes are fighters. While this may not be the season they expected, this team has proved that even after two quarantines they can still come out on top. They can still win games. They can still play football. The next chapter of this season is just starting. Let the playoffs begin.

Kaitlyn Wadulack is a third-year journalism student specializing in sports and media at the University of Florida. You can reach Kaitlyn at k.wadulack@ufl.edu
Previous Oak Hall Advances to State Championship
Next Gators Defeat Georgia for First Time since 2016 and In Dan Mullen Era