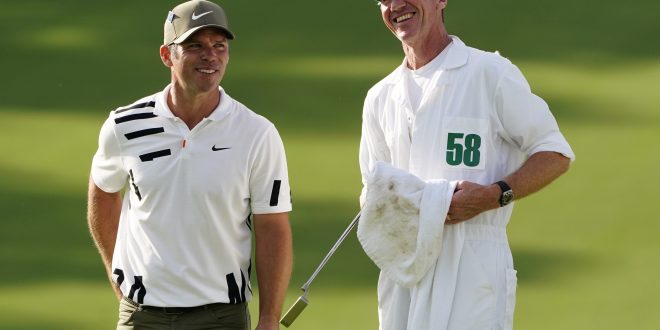 Paul Casey, of England, laughs with his caddie John MacLaren after his first round of the Masters golf tournament Thursday, Nov. 12, 2020, in Augusta, Ga. (AP Photo/Matt Slocum)

The 84th Masters began round one of play, Thursday, for the long-awaited battle for the green jacket. The tournament began just after 7 a.m. yesterday morning with Jack Nicklaus and Gary Player hitting the ceremonial tee shots. Then, the tournament was hardly underway when rough weather put the players on a waiting game for the next three hours.

When the weather cleared, all systems were back on go. On the leaderboard, by the end of the round, was Paul Casey (-7), Webb Simpson (-5) and Xander Schauffele (-5).

Casey gave Augusta National his best tournaments start yet after tuning in a scorecard of just 7 under. In just the 2nd hole, he shot an Eagle in a par-5.

“I did the right things when I needed to. To be honest, you rarely walk of the course not going there could have been two or three better, but I still felt that way. I don’t want to be greedy either, I’m very happy with my 65,” Casey said.

According to Casey, his Eagle wouldn’t have been possible in a month like April.

Casey ended round one bogey-free and two shots over Webb Simpson. At 5 under, Webb Simpson kept a similar rhythm as Casey. Simpson also grabbed an Eagle on Hole 2 and turned in his card bogey-free. A year ago, Simpson accomplished his best career finish at the Masters at a T5.

Xander Schauffele is cozied up next to Simpson also repping at 5 under scorecard after the conclusion of round 1. Schauffele started the day off great with 3 birdies in the first 3 holes. Although, he couldn’t keep the same momentum throughout the rest of the round and chalked four bogeys before the day was done.

Round 1 reached its conclusion earlier today around 9 a.m. The second round of the Masters began today at 9:35 a.m. with Paul Casey teeing off in Group 23 a little after 2 p.m. 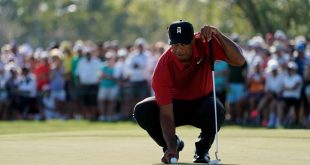 Tiger woods has fifth back procedure

The U.S. Open will finally start on Thursday after being postponed since mid-June. Late Start …