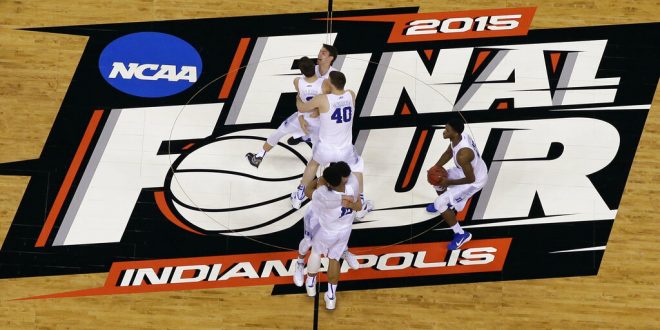 FILE - Duke players celebrate after the NCAA Final Four college basketball tournament championship game against Wisconsin in Indianapolis, in this Monday, April 6, 2015, file photo. The NCAA announced Monday, Nov. 16, 2020, it plans to hold the entire 2021 men’s college basketball tournament in one geographic location to mitigate the risks of COVID-19 and is in talks with Indianapolis to be the host city (AP Photo/David J. Phillip, File)

NCAA To Host March Madness In One City

You read that right.

The NCAA announced on Monday they will look to host the 2021 NCAA men’s basketball tournament in one geographic location this year, rather than the 13 first and second-round sites they had originally planned to host 68 Division I teams from across the country.

Indianapolis has long been the planned site for the 2021 Final Four but a 68-team bubble-esque atmosphere would likely mean more game sites than solely Lucas Oil Stadium, home of the Indianapolis Colts.

Alternative hosts could include Bankers Life Fieldhouse (Pacers), college campuses such as Notre Dame, Purdue, Indiana, Butler, Indiana State and others in the surrounding area.

Overheard in a March Madness planning session at NCAA HQ:

"… and they could call it the 'HOOSIER DOME,' see?" pic.twitter.com/l7EZnvSK1n

It’s no surprise the NCAA has already begun to make their preparations in an effort to have the tournament run in 2021.

March Madness has become a nearly $1 billion dollar annual event for the NCAA and it can account for approximately 85% of the organization’s revenue in a given year.

ESPN’s Jay Bilas, who doesn’t shy away from being critical of the NCAA, agrees with how the NCAA is planning to move forward.

This year’s tournament is tentatively scheduled to begin on March 16. But with disruptions to the regular season slate likely, the way the year unfolds will be a determinant for when the NCAA can let the madness begin. Because of this, the tournament could commence as late as May.

Back in March, the NCAA saw the “Big Dance” be canceled after the coronavirus pandemic surged across the country. Having a tournament without the proper safety protocols in place was simply not feasible.

Fast forward nine months and the pandemic continues to swell across the United States. Except this time, the NCAA’s proactive planning process gives hope to once again having March miracles unfold.