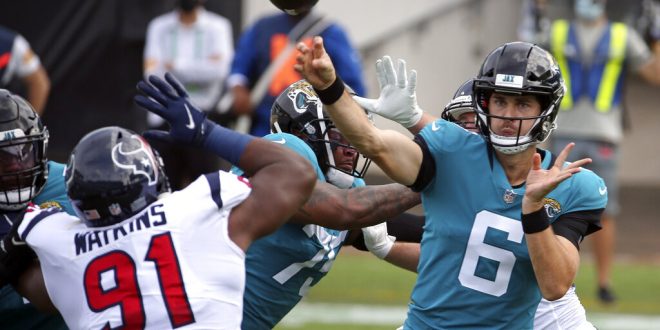 The Jacksonville Jaguars’ 2020 season has been an unmitigated disaster so far. The team is just 1-8 on the season, and only one team in the NFL, the winless New York Jets, has a worse record.

The road doesn’t get any easier for Jacksonville this week, as the undefeated Pittsburgh Steelers come to town. Sitting pretty at 9-0, the Steelers boast one of the league’s best defenses.

The Jaguars haven’t earned a victory since Week 1 against Indianapolis. They need an uncharacteristically strong performance to unseat the NFL’s lone undefeated team on Sunday at 1 p.m.

Starting quarterback Gardner Minshew II, who injured his throwing hand several weeks ago, is out once again. In his place, sixth-round pick Jake Luton, a rookie from Oregon State, will make his third consecutive start.

Luton has been just average in his first two starts, completing just over 60 percent of his passes for 473 yards, two touchdowns and two interceptions.

Jacksonville is currently in position to take an elite quarterback in the 2021 NFL Draft. If Luton wants to stake a claim for the job next season, he’ll need his best game yet against a Pittsburgh defense which ranks third in points allowed and sixth in yards allowed.

The Steelers are certain to put pressure on him, as linebacker T.J. Watt is tied for second in the league with nine sacks on the year. Luton talked about game-planning against Watt.

The Jaguars, who average just 22.1 points per game, will need to find some sort of spark if they’re to be successful.

Big test for the defense

Defensive struggles have been a theme throughout the season in Duval.

Jacksonville allows both the second-most points and yards in football, and now cornerback C.J. Henderson, the ninth pick in the 2020 NFL Draft, is on the injured reserve.

That will make it tough to stop a Pittsburgh passing offense that has been superb this season. Quarterback Ben Roethlisberger has 22 touchdowns to four interceptions, and receivers JuJu Smith-Schuster and Chase Claypool each have at least 500 yards so far.

Coach Doug Marrone talked about the challenge the efficient Steelers offense poses to his secondary.

Jacksonville ranks last in the AFC South, and with a playoff appearance not on the table, it doesn’t have much to play for at this point. But the young team still hopes to see progress, and a win over the league’s top team would certainly constitute that.