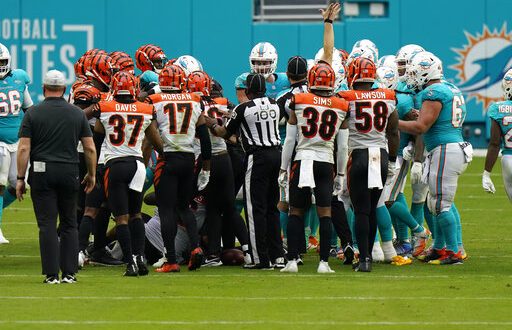 NFL referees attempt to stop a fight on the field during the second half of an NFL football game between the Miami Dolphins and the Cincinnati Bengals, Sunday, Dec. 6, 2020, in Miami Gardens, Fla. (AP Photo/Lynne Sladky)

The Miami Dolphins have won seven of their last eight games after a 1-3 start. Their latest win comes from a depleted Cincinnati Bengals team playing with out several key players including starting quarterback Joe Burrow.

Both teams lost a lot in this game. Overall, there were five ejections and four injured players. For the Bengals, it was first left tackle Jonah Williams needing to be carted off the field. Then starting quarterback Brandon Allen was knocked from the game. For the Dolphins, linebacker Elandon Roberts had a chest injury, and right tackle Ereck Flowers left the game with an ankle injury.

Also, the Dolphins had three players ejected. Xavien Howard, Devante Parker and Mike Hollis all were ejected for throwing punches. The same can be said for two Bengals players. Tyler Boyd and Shawn Williams were also ejected from the game.

The ejections stemmed from a kick-catch-interference penalty. Jakeem Grant was back to receive a punt and Bengals gunner Mike Thomas hit Grant before the ball even arrived. Dolphins coach Brian Flores was among many Dolphins players on the field yelling about the hit.

Miami Dolphins coach Brian Flores is held back by head of security Drew Brooks after Bengals receiver Mike Thomas commits a second penalty on a Jakeem Grant punt return. "He didn't let it go," Tua Tagovailoa said. "He stood up for us." Photo: Jim Rassol/PBPost pic.twitter.com/4jPB7tXW4X

Thomas was penalized for the hit. However, he was not ejected.

Miami played a great game on defense. The only allowed 196, and 72 of then came from one play. A 72-yard touchdown run by Tyler Boyd in the first quarter. From there, the defense locked in and didn’t allow another point.

The Dolphins had two interceptions on the day. First, Brandon Allen threw a pick to Xavien Howard. Howard leads the league with eight interceptions. Then, Ryan Finley was in for the forth quarter and threw an interception on the Bengals last drive of the game.

Kyle Van Noy also had a huge game. He had three sacks on the day, while Shaq Lawson had two and a half.

Next week the 11-1 Kansas City Chiefs travel to Miami for a showdown with the Dolphins. Patrick Mahomes makes his return to Hard Rock Stadium where he won the Super Bowl last year. It should be a great matchup between the Dolphins’ secondary and the Chiefs’ receivers.

@AnschultzChase
Previous Pat Dooley’s Back 9: December 7
Next Glennon And Jaguars Lose To Vikings 27-24 in Overtime