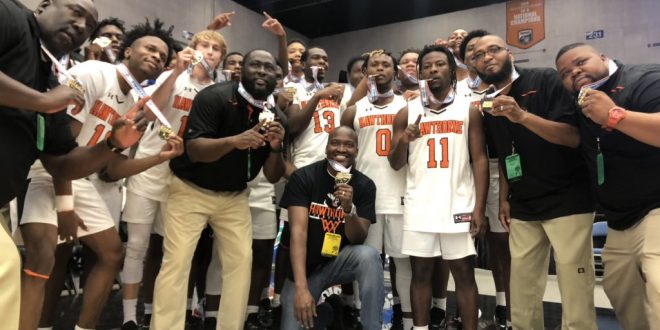 The Hawthorne Hornets boys' basketball team poses with their medals after defeating Hilliard 42-38 to win the 1A state championship on March 6, 2020 (Michael Kennedy, ESPN Gainesville).

Up 40-38 with a couple of seconds remaining, Hawthorne Hornets guard Dre Lawrence steps up to the free-throw line for the biggest shots of his life.

The junior had to tune out the sound from both the antagonistic Hilliard fans and the rowdy Hawthorne crowd. Nailing both free throws would seal the game for Hawthorne, clinching their first boys’ basketball state championship since 1987.

After receiving a bounce pass from the official, Lawrence takes a deep breath and looks at the basket.

One side of the arena had all hope sucked from their soul. But the other, Hawthorne’s side, started a long-awaited celebration.

“After we won, we went outside in the parking lot, and all the fans ran out to us,” Lawrence said. “They were playing music out of their trucks, and everybody just started dancing together. It was a crazy feeling.”

Crazy but familiar for the Hawthorne crowd, as they experienced the girls’ team winning its first-ever championship on the same floor mere days earlier when they beat Port St. Joe 33-32.

“Half of us were crying,” freshman forward Jaz’lyn Jackson said. “We were so happy. Like, oh my god, we really did this. The first girls’ basketball team to win a state championship. Phew. It was a sigh of relief.”

Despite the long drought between state titles (the girls had never won and the boys’ latest title dated back to 1987), those at Hawthorne never lost any confidence, especially principal Daniel Ferguson.

“After we got so close in football, going into basketball season, he’d always come up to me and say the same thing,” assistant football and girls’ basketball coach Raymond Cue said of Ferguson. “He’d say ‘I had a dream. Ain’t nothing we can do to mess this up. We’re gonna win a state championship no matter what.’ He predicted that at the beginning of the season, and he reminded us all the way.”

In the previous season, the Hornets’ boys’ basketball team had made it to the Regional Finals, falling to Madison County 53-48. The girls’ team, meanwhile, had fallen in the State Semifinals 56-40 to Holmes County.

“Our team motto for both teams going into the year was ‘Why not us?’” head boys’ basketball coach Greg Bowie said. “We felt like we could have won it a couple of the years prior. We lost here against Madison County. Then they went on to win it all. We felt like that could have been ours. At some point, it had to be our turn.”

@CoachBowie_HHS & @CIngram_85 have both earned 1A Coach of the Year. You both took a school with 180 students and gave your community 2 state championships. We finished the season 54-5(34-0 vs 1A), 2 District, 2 Regional, and 2 State championships. You both deserve it. #WhyNotUs! pic.twitter.com/W4EdQBh2dg

Head girls’ basketball coach Cornelius Ingram felt similarly about his team getting within arm’s reach of a championship.

“We made a Final Four run the year before, and we felt we played the worst we could play, so we knew that we would have a chance the following year,” Ingram said. “And I think the girls did a great job with showing up that offseason and working their tails off. And then, of course, the boys did as well. So, it was almost like one big family, and everybody was just buying in.”

Ingram is not the only one to credit Hawthorne’s tight-knit community as what sets it apart from anywhere else.

“Doing it with these coaches is what makes it special,” athletic director Dustin Adkins said. “We roamed these halls together. Doing it with people you consider family just means so much more. And with how close our relationship is, it’s infectious to our whole athletic program. Our boys really mess with our girls, our girls really mess with the boys, and we really mess with each other. It always starts at the top. We hang out all the time outside here. I consider it a family, and that trickles downward.”

Hawthorne’s athletes show as much love to the city as the coaches do, even if they spend little time there, like 2020 graduating senior Torey Buie who played only one season with the Hornets.

“Playing for Hawthorne was the best experience of my life,” the boys’ leading scorer said. “I played under coaches who understood me and why I play with so much passion. The fans who once cheered against me welcomed me with open arms, and I’ll forever be thankful.”

Torey’s younger sisters, Leiana and Oshiana, also transferred to Hawthorne prior to the 2019-20 season and play basketball. They too took to the special environment.

“It’s a great environment because everybody’s like a family,” Leiana, the team’s third-leading scorer with 10.2 points per game, said. “I’m not even from here. I’m from Flemington, Florida, and I went to school in Ocala before coming here last year. Yet, everybody still instantly took me in with open arms.”

Leiana Buie with what would ultimately prove to be the game-winning shot for Hawthorne to send the Hornets to the State Finals!

Other students who transferred to Hawthorne, like junior Chauncey McFadden, felt the same kind of love.

“It’s more of a loving community; I came from a bigger school where you’re more on your own,” said McFadden, who transferred from Gainesville High. “Once you get here, everybody is always working together and showing love to coaches. You see later on that what the coaches say is actually true.”

What the coaches preached from the beginning of the season was a defense-first mentality, and they carried that to 19-3 and 23-2 regular season records for the boys and girls respectively.

“Skillset is an offensive thing,” Cue said. “What we pride ourselves on is defense. Anybody can play D. It’s a mindset. So, no matter how skilled you are, you won’t be playing for us if you don’t play defense. And that’s with boys and girls. We look back at teams who we think are good and see if we held them to their season low in points.”

Holmes County’s final desperation heave is intercepted by Jaz’lyn Jackson. Fitting that the Hornets would win the game on a defensive play.

Against Orange Park as part of a holiday tournament in December, the boys had what Bowie considers one of the best defensive performances he’s been a part of.

“We watched them play the night before, and I didn’t see them miss a shot,” Bowie said. “They had a dunk fest whenever they wanted to. Going into the game, I said we got to try to keep them under 50. We held them to 25 points, and that was a pretty good Orange Park team. They were undefeated at the time. Just with that defensive performance alone, I was like ‘if we play defense like this, we got a chance,’ and that carried over the rest of the season.”

Bowie was lucky that his whole team bought into the team-first culture too.

“We only had one guy average double figures,” Bowie said. “Nobody else really wanted to score. I really wanted Key’shaun Williams to be a scorer for us, but he didn’t really want to, and I told him before the season, ‘If you’re not going to give us double-digit scoring, then, you’re gonna have to guard the team’s best player every night.’ And he was totally fine with that. He didn’t really want any assignments offensively, but he did a great job of defending all season long. It was an unselfish team. We didn’t get a lot of points from a lot of people, but we did just enough to win.”

The girls’ team also bought into this all-around philosophy under Ingram, as their top four scorers all averaged between 10.2 and 11.5 points per game.

“None of our girls were selfish, but a lot of them felt like they could score,” Ingram said. “Some of them could average 20. But they’re all unselfish, and they move the ball around. So, they bought in to understanding that you might not get your 30 or your 25, but you can get your 10 or 12 every night and then be followed up by four or five other girls. And when they took that approach, we kind of took off. And I think that’s what put us over the hump, all the girls being unselfish.”

“It’s more of a loving community; I came from a bigger school where you’re more on your own,” said McFadden, who transferred from Gainesville High. “Once you get here, everybody is always working together and showing love to coaches. You see later on that what the coaches say is actually true.”