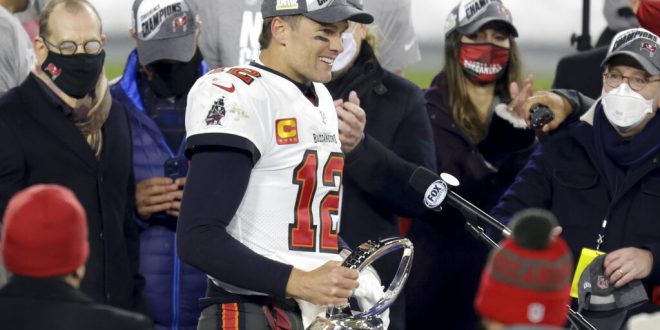 We should expect nothing less from a team with Tom Brady under center. For the first time since 2003, the Tampa Bay Buccaneers are going to the Super Bowl. The Bucs will face the defending champions, the Kansas City Chiefs. This is also the first time in NFL history that a team hosting the Super Bowl will also play in it.

Mahomes vs. Brady. Arians vs. Reid. This should be a spectacular Super Bowl LV on Feb. 7.

On Sunday, the Bucs defeated the Green Bay Packers on the road in the NFC Championship, 31-26. The Bucs came out strong and looked invincible in the first half. Everything went their way and Brady led the offense like no other. The dominance shows with this Fournette touchdown run.

Following this play, the Bucs never lost the lead. It looked bleak for the Packers when their running back, Aaron Jones, fumbled on the opening possession for the second half. Brady would throw a touchdown pass to tight end Cameron Brate on the next play, giving them a 28-10 lead. The Packers would continue to have opportunities to take the lead but squandered it by abandoning the run game. Even with Brady throwing three interceptions in a row, the Packers were only able to convert those turnovers to six points. Todd Bowles has done an incredible job with this defense and the difference, in the end, was the coaching, this is why the Bucs were victorious. Brady praises the defense for their work all season.

This should be an interesting matchup. The way the Bucs defense has been playing, it can give them a chance to slow down the Chiefs. Their defensive line applies the perfect amount of pressure needed to make Patrick Mahomes uncomfortable. Tampa sacked Aaron Rodgers five times yesterday.

The Bucs linebackers hit hard and cause chaos. Shaquil Barrett and rising star Devin White are both studs. Barrett totaled three sacks and White led the team in tackles with 15 and a fumble recovery. White should be the primary guy to guard the tight-end Travis Kelce. Kelce is coming off an 18 catch, 117 yards and two touchdown game in the AFC Championship. It seemed as though Kelce was never, not open. Man coverage is challenging enough against the chiefs so White will have to play extremely well in those situations.

Their secondary has been making big plays and causing problems for opposing teams passing attack. This season, Aaron Rodgers threw five interceptions, three against the Bucs. If Tampa can get their safeties back, Jordan Whitehead and Antonie Winfield Jr., they can match up against Chiefs and their unbelievable receiving core.

This is key because earlier this season when the Bucs faced the Chiefs, Tyreek Hill had seven catches for 203 yards and two touchdowns in just the first quarter. The Chiefs ultimately won this game 27-24, but they dominated the Bucs.

It is not that the Bucs defense has to cause turnovers, they just need to get the Chiefs offense off the field. In their two post-season games, The Chiefs have only punted once.

If Brady can manage the offense and limit his turnovers, the Bucs can win this Super Bowl. He can show everybody why he is the G.O.A.T and slow down Mahomes’s chase for that crown.

Mahomes and the Chiefs vs. Brady and the Bucs.