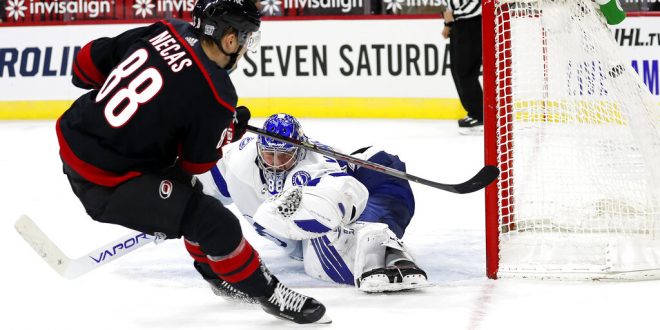 Lightning Come Up Short Against Hurricanes

The Tampa Bay Lightning dropped their second straight game Thursday night, losing 1-0 to the Carolina Hurricanes in overtime. It was the Lightning’s first contest in over five days and the Hurricanes’ first game in close to two weeks.

Not a lot of Offense

Tampa Bay (3-1-1) was looking to rebound after suffering its first loss of the season on Jan. 23. But, the Lightning could not find much offense against Carolina (3-1-0).

In fact, Thursday marked the first time this season that Tampa Bay was shut out in a game. Additionally, it was also the second overtime game the Lightning have played in through five games, as well.

After trading shots back-and-forth for three periods, the Hurricanes were able to score the game’s first goal when it mattered most in overtime. Center Martin Necas was able to find the back of the net off of assists from teammates Jordan Staal and Dougie Hamilton with just under four minutes to go.

MARTY NECAS FOR THE WIN pic.twitter.com/0WR8ZWFaNb

Necas’ game-winning score was his first goal on the young season.

While Necas was the hero for Carolina, the Hurricanes also got a big game from goalkeeper Petr Mrazek, too. Mrazek finished with 32 saves, including this one early on in the second period to keep the score deadlocked at 0-0.

For Tampa Bay, it also received a big game from goalkeeper Andrei Vasilevskiy, who for the second time this season, managed to record over 30 saves. Despite allowing the lone goal, Vasilevskiy still racked up 34 saves Thursday night.

Other notable final stats from the game:

The Lightning will look to break their two-game skid on Saturday when they host the Nashville Predators at 7 p.m. For Carolina, it will look to build off this win and make it two in a row when it takes on the Dallas Stars also on Saturday at 7 p.m.