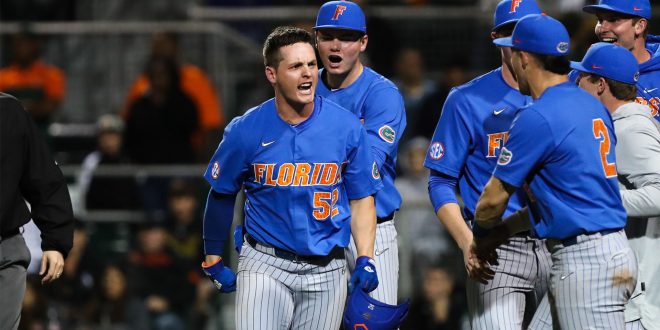 Florida Baseball Third Baseman Kirby McMullen Excited to be Back

After the NCAA granted all spring athletes an extra year of eligibility to account for the cancellation of the 2020 season, Florida third baseman Kirby McMullen is thrilled to return to Gainesville for one more year.

Through 16 games last season, the Ocala native batted .278 with 10 RBIs and 14 runs scored. McMullen drew a team-high 14 walks and finished the season with a .458 on-base percentage. The highlight of McMullen’s 2020 season came against then-No. 1 Miami when the senior hit a go-ahead home run in extra innings.

Entering the new season, the Gators will attempt to finish off what they started last year. UF finished the shortened season ranked No. 1 in the country, boasting a 16-1 record. Florida’s lone loss came against then-No. 15 Florida State in the final game ever played at McKethan Stadium.

Out with the old, in with the new.

Demolition of McKethan Stadium is underway (pics from today) and the new Florida Ballpark is a few finishing touches away from being ready to go. pic.twitter.com/cyVLZkrdJy

Transitioning from McKethan Stadium to the new Florida Ballpark, the Gators will need to make some adjustments. “The biggest difference is the field is a lot bigger…both gaps are a lot bigger,” McMullen noted.

The new stadium includes some new features such as a pitching lab where a flight scope takes various measurements. McMullen mentioned how the team is already putting the turf half field behind right field to good use.

As the Gators enter the 2021 season ranked No. 1 in the nation, expectations couldn’t be higher. “Being at the University of Florida, we always got a target on our back,” McMullen said. “That target’s just a little bit bigger now that we’re number 1.”

That said, McMullen feels confident about the team heading into the spring. “It doesn’t seem like we really skipped a beat,” McMullen said. “Losing only [Austin] Langworthy and Brady Smith, it kind of feels like we should be able to get back to right where we were at.”

Florida kicks off its 2021 season on Feb. 19 in a weekend home series against No. 21 Miami. In last year’s series in Coral Gables, the then-No. 2 Gators swept the then-No. 1 Hurricanes.

“It was like an SEC series honestly,” McMullen said. “Everyone was a little bit nervous…hopefully our nerves are…a little bit less running or a little bit more relaxed for that big series coming up.”

Hello! I am a sophomore at UF studying journalism sports & media. I help contribute radio and website content for ESPN Gainesville. Additionally, I am a sports writer for The Independent Florida Alligator and help cover the UF women's basketball team. I am also the UF softball beat reporter for ChompTalk.com.
Previous Gators Lacrosse Nationally Ranked
Next Gainesville takes abrupt hit from Bradford

The Gators start their final home series of the season on a high note. They …